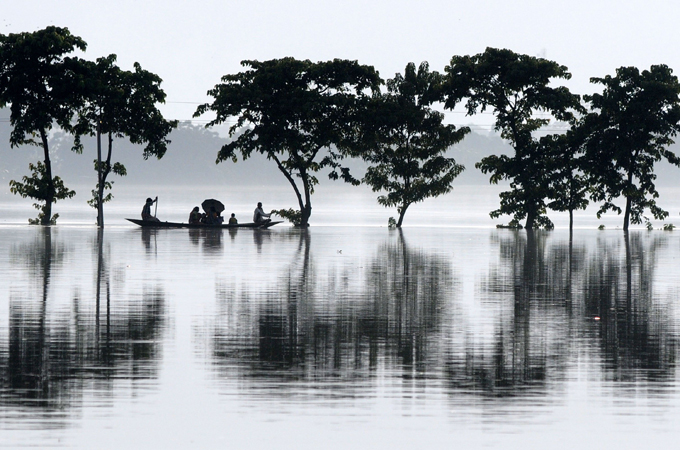 Villagers travel on a boat through floodwaters in Tataliguri, Morigoan district in India’s northeastern state of Assam [AFP]

Floods have hit Assam state in the northeast of India, a region famous for its hilly tea growing areas. Around 100 people are now known to have died as a result of this year’s monsoon rains. Meanwhile, much of India has actually suffered lower than average rainfall.

Almost two million people have been made homeless in what is being described as the worst flooding in recent times. The slow passage of this season’s rains mean that the northeast of India along with Bangladesh have been hit by seemingly relentless rainfall which has caused the mighty Brahmaputra River and many of its tributaries to breach their banks.

Thousands of homes have been washed away in the process. Roads, bridges and power lines have also been destroyed.

Indian Army soldiers have helped with the evacuation of flood–affected villagers. Almost half a million people are currently living in relief camps.

Water levels have receded but authorities are now battling to stave off the threat of disease. The stinking carcasses of cattle and other animals in the floodwater have added to the danger of an epidemic.

To the west, Mumbai has become waterlogged with the unrelenting downpours. On Wednesday, 83mm of rain were recorded and there have been similar amounts of rainfall for many days now.

Further north, New Delhi has been late to see the rains setting in. They have finally arrived here, much to the relief of the millions of farmers across the northwest.

According to the Indian Meteorological Department the monsoon rains have been around 30 per cent deficient so far this year. The country as a whole has received 138mm of rain, compared to the norm of 198mm since the onset of the monsoon.