Syrian forces and rebels have clashed violently in and around Aleppo as the battle for control of the northern city raged into a third day, with both sides claiming advances.

The Syrian army claimed on Monday to have overrun part of the city’s rebel-held Salaheddin district, but the claim was denied by a Free Syrian Army commander.

“The Syrian army took control of part of Salaheddin district and continues its offensive,” a security source in Damascus said.

Colonel Abdel Jabbar al-Oqaidi, head of the FSA military council of Aleppo, the country’s most populous city and commercial capital, insisted government troops had “not progressed one metre”.

“We launched a new assault from Salaheddin during the night, and we destroyed four tanks,” the rebel commander said by phone.

Since the launch on Saturday of the regime assault on Aleppo, the FSA “has already repelled three offensives” against Salaheddin, he said, adding that the rebels controlled “between 35 to 40 per cent of Aleppo”.

Rami Abdel Rahman, the head of the Syrian Observatory of Human Rights, said government forces were on Monday “just reaching the outskirts of the [Salaheddin] neighbourhood”.

Colonel Oqaidi said that “several quarters of Aleppo are being bombed with MiG [fighter jets] and helicopters”.

Activists on the ground reported that a string of rebel-held districts in Aleppo were shelled or hit by small-arms fire during the night. They said some were strafed by helicopter gunships.

UN Secretary-General Ban Ki-moon on Monday singled out Syria’s government for censure, telling it to halt its violent crackdown on the dissidents and rebels fighting to overthrow President Bashar Assad’s regime, a day after Syrian tanks attacked a convoy carrying the head of the UN observer mission.

Ban noted that his peacekeeping chief, Herve Ladsous, recently went to Syria where he “called on the government to end its use of heavy weapons and demonstrate the commitment to ending the armed violence. Government officials have repeatedly said they would honour these commitments. We are still waiting for them to act.”

Ban said that a dozen armoured vehicles used by the military observers have been destroyed by blasts and shelling, and a convoy carrying the general heading the force was targeted on Sunday.

“Yesterday, the convoy of Lieutenant-General Babacar Gaye was attack by armed tanks. Fortunately there were no injuries,” Ban said.

The UN observer mission’s latest 30-day mandate is due to expire in August, and the United States, Britain and France do not want to see it extended under these circumstances.

Syria’s most senior diplomat in the UK, meanwhile, has stood down in protest at the “violent and oppressive” actions of al-Assad’s regime, the British foreign office confirmed on Monday.

In a blow to Damascus, charge d’affaires Khaled al-Ayoubi informed the British authorities that he was “no longer willing” to represent the government amid the brutal repression of rebels.

The British Government said his decision represented the “revulsion and despair” of Syrians and urged others around the world to follow his example and abandon Assad.

Outside of Aleppo, rebels seized a strategic checkpoint after a 10-hour battle, securing them free movement between the northern city and Turkey, a FSA commander said.

“The Anadan checkpoint… was taken this morning at [02:00GMT] after 10 hours of fighting,” said General Ferzat Abdel Nasser, a rebel officer who deserted the Syrian army a month ago.

By securing the checkpoint, about 5km northwest of Aleppo, the rebels now control a direct route between the Turkish border and the commercial capital.

Six soldiers were killed and 25 were taken as prisoners, General Ferzat said, adding that four of his own men died in the fighting.

UN humanitarian chief Valerie Amos said in a statement that an estimated 200,000 people had fled from Aleppo in two days and an unknown number were still trapped in the city.

US Defence Secretary Leon Panetta warned Assad that the assault on his own population in Aleppo would be a “nail in his coffin”.

“It’s pretty clear that Aleppo is another tragic example of the kind of indiscriminate violence that the Assad regime has committed against its own people,” Panetta told reporters on a military plane en route to Tunisia.

“And in many ways, if they continue this kind of tragic attack on their own people in Aleppo, I think ultimately it will be a nail in Assad’s coffin,” he said.

“He’s just assuring that the Assad regime will come to an end by virtue of the kind of violence they’re committing against their own people.”

French Foreign Minister Laurent Fabius said in Paris on Monday that France, which is taking over the UN Security Council’s rotating presidency in August, will call an emergency ministerial meeting on Syria.

Fabius told French radio station RTL he would chair the meeting himself and that it had to be held urgently to stop Assad’s regime carrying out massacres in Syria.

“Since France is taking the presidency of the UN Security Council on August 1, we will make a request before the end of this week for a Security Council meeting, probably on the ministerial level to try to stop the massacres and to prepare a political transition,” Fabius said. 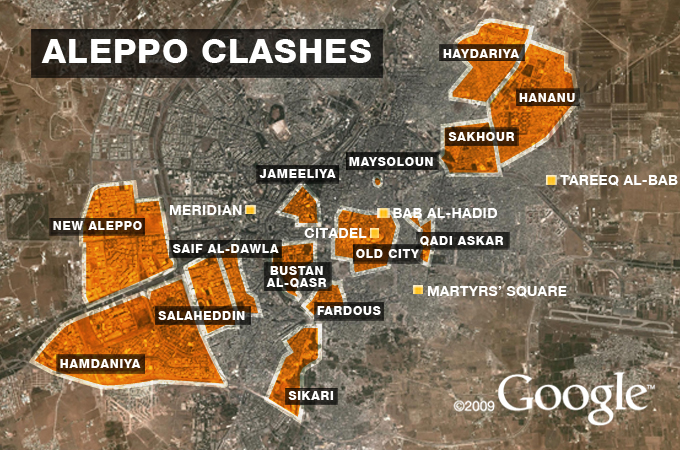