Thousands of Hong Kong parents and activists have protested against a plan to introduce national education lessons, labelling it as a bid to brainwash children with Chinese propaganda.

“As a parent, I’m very angry, this is a blatant brainwashing,” mother-of-three Sandra Wong said as she marched in the sweltering heat accompanied by her husband and pushing her two-year-old daughter in a stroller.

“The curriculum only paints a rosy picture about the Communist Party… This is just an attempt to introduce the mainland agenda in Hong Kong schools.”

The government has said national education lessons, to be introduced in September and made compulsory in 2015, are important to foster a sense of national pride and belonging.

Hong Kong, which gained independence from the United Kingdom in July 1997 after more than 150 years of British rule, remains a semi-autonomous part of mainland China.

It has its own political and legal system that guarantees civil liberties not seen in China, including freedom of speech and association, but its chief executive is elected through a “small-circle” election that excludes many would-be voters.

A poll released by the University of Hong Kong last month showed the number of people in Hong Kong identifying themselves as citizens of China had plunged to a 13-year-low. More identified themselves as Hong Kongers.

Rejecting the brainwashing claims, the government has vowed to push ahead with the plan, although it announced the formation of a special committee to monitor the implementation of the subject following the mass protest.

The committee will ensure the subject is taught in a way “to educate our students to have independent thinking, to be able to analyse situations and come to an objective judgment”, Carrie Lam, the chief secretary, told reporters.

Under the proposal, students would take 50 hours of lessons a year focusing on “building national harmony, identity and unity among individuals”. There would be no exams.

“There is nothing wrong with national education but it shouldn’t be done in a biased way,” Shirley Cheung, a high school student, said at the protest.

“Currently the curriculum makes no mention about issues like the Tiananmen Square crackdown or who is (Chinese dissident) Ai Weiwei, so we are not convinced it can encourage independent thinking,” the 17-year-old added.

The protest came after a teaching booklet called “The China Model”, which heavily praised China’s one-party system, was sent to local schools in recent weeks, further fuelling debates over the lessons.

The plan to introduce national education has been on the government’s agenda for years but the renewed push came weeks after the new government led by Leung, seen as pro-Beijing, took office. 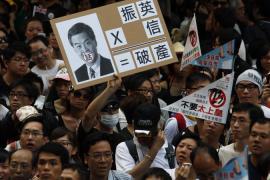 An evening of echoes in Hong Kong

Hong Kongers fear that their identity will slowly disappear, along with their democracy, and they will be assimilated into China. 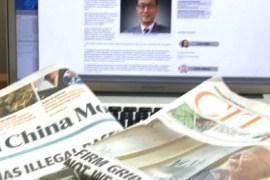 Journalists, who have traditionally operated freely, see China tightening its grip on the territory. 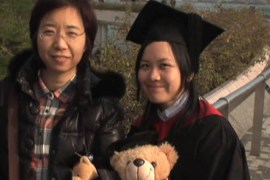 A focus on education has led Hong Kong students to be rated among the world’s best.