Greenland’s surface ice cover melted this month over a larger area than ever detected in more than 30 years of satellite observations, NASA has said.

According to measurements from three separate satellites analysed by NASA and university scientists, an estimated 97 per cent of the ice sheet surface thawed at some point in mid-July, the agency said in a statement on Tuesday.

“This was so extraordinary that at first I questioned the result: was this real or was it due to data error?” NASA’s Son Nghiem said.

The expert recalled noticing that most of Greenland appeared to have undergone surface melting on July 12 while analysing data from the Indian Space Research Organisation’s Oceansat-2 satellite.

Results from other satellites confirmed the findings. Melt maps drawn up showed that on July 8 about 40 per cent of the ice sheet’s surface had melted, rising to 97 per cent four days later.

Until now, the most extensive melt seen by satellites in the past 30 years was about 55 per cent.

The news comes just days after NASA satellite imagery showed that a massive iceberg twice the size of Manhattan had broken off the Petermann Glacier in Greenland.

The latest break was observed by NASA’s Aqua satellite, which passes over the North Pole several times a day, and was noted by the Canadian Ice Service.

Andreas Muenchow, an Arctic oceanographer at the University of Delaware, said climate change was a factor in the current state of the Petermann glacier. He said the glacier is as far back towards the land as it has been since the start of the Industrial Revolution more than 150 years ago.

In the summer, on average about half of the surface of Greenland’s ice sheet melts naturally, NASA said.

Normally, most of that melt water quickly refreezes at high elevations, while in coastal regions some of it is retained by the ice sheet while the rest flows into the ocean.

“But this year the extent of the ice melting at or near the surface jumped dramatically,” NASA added.

Researchers have yet to determine whether the melt, which coincided with an unusually strong ridge of warm air over Greenland, will contribute to a rise in sea level.

NASA said that even the area near the highest point of the ice sheet, located 3.2km above sea level, showed signs of melting.

According to glaciologist Lora Koenig, who was part of the team analysing the data, melting incidents of this type occur every 150 years on average.

“With the last one happening in 1889, this event is right on time,” Koenig said. “But if we continue to observe melting events like this in upcoming years, it will be worrisome.” 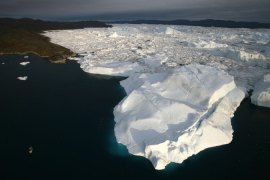 The rate of melting of ice and snow in this Arctic wilderness is greater than at any time since the nineteenth century. 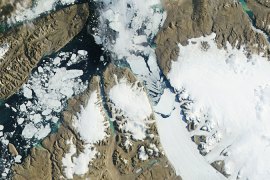 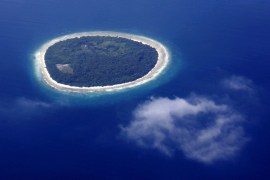 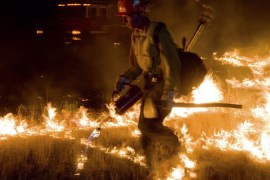 As the US faces high temperatures with raging wildfires and droughts, we ask if this is what climate change looks like.