Less than a week after Yoshihiko Noda, Japan’s prime minister, won approval for a controversial sales tax increase, 52 politicians have decided to quit his governing party in protest.

Forty lower house members and 12 upper house members will resign, including political heavyweight Ichiro Ozawa, though the government will keep a slim majority in the powerful lower house, an aide told the Reuters news agency on Monday.

The defection would leave the Democratic Party of Japan (DPJ) with just 249 members in the 480-member lower house of parliament.

The departure of Ozawa and his followers means Noda could be in a better position to consolidate his grip on his fractious party, though he will need opposition help to pass laws, since rival parties control the upper house, which can block bills.

The plan to double the sales tax to 10 per cent in three years to curb ballooning public debt was passed by parliament’s lower house last week with the help of the opposition.

But 57 politicians from the ruling Democratic Party voted against it, with 15 others abstaining or absent.

Ozawa, a 70-year-old former party leader, has argued the planned tax hike violates campaign pledges made when the
Democrats swept to power three years ago, promising to limit the powerful bureaucracy and cut wasteful spending before raising taxes.

Noda, a former finance minister, has insisted the measure is vital to get Japan’s fiscal house in order and fund the bulging social welfare costs of a fast-ageing population.

Japan has suffered a string of credit downgrades in the past two years, largely because of its failure to make progress in tackling its debt, already twice its economic output and the worst among advanced industrialised countries.

While the tax plan’s approval in the lower house marked a milestone for a nation long trapped in a cycle of revolving-door governments and policy gridlock, it comes at a political and economic price.

Many people are also wary of raising the tax at a time when Japan’s recovery from last year’s triple blow of a big earthquake, tsunami and nuclear crisis is not yet assured.

Ozawa, whose mastery of backroom deals cut during his four-decade political career earned him nicknames of “Shadow
Shogun,” has suffered a series of setbacks in the past few years.

The man credited by many with orchestrating the Democrats’ historic victory in 2009 lost a party leadership race in 2010 to then-prime minister Naoto Kan and in June last year failed to oust Kan in a no-confidence vote.

Ozawa has loomed large on Japan’s political stage for more than two decades, but many analysts see his influence waning, one reason being a generational shift in political circles, and voter distaste for the old style, back-room politics he came to symbolise. 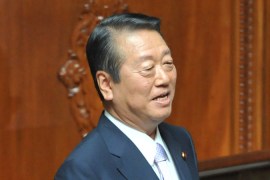 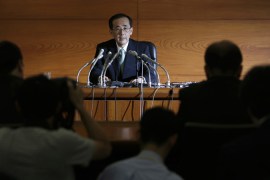 Naoto Ken tells inquiry that state should bear most of blame for meltdown at tsunami- and quake-stricken nuclear plant. 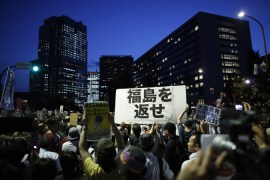 Dozens of people protest against decision to bring back online one of the Ohi nuclear plant’s reactors in western Japan.