The United Nations Security Council has scheduled a vote on a new Syria resolution although there appeared to be little hope the group would unite behind the plan to end the 16-month crisis.

Diplomats said on Tuesday that there is little chance of successful last-minute negotiations between the disputing nations before the vote slated for Wednesday afternoon.

The key stumbling block is the Western demand for a resolution threatening non-military sanctions and tied to Chapter 7 of the UN Charter, which could eventually allow the use of force to end the conflict in Syria.

Russia is reportedly opposed to any mention of non-military sanctions or Chapter 7, which can be enforced militarily, which the US and its European allies insist must be included in a new resolution.

Late on Tuesday, Russia called for consultations on the proposed resolution. Alexander Pankin, a Russian deputy ambassador, said after the meetings that any mention of Chapter 7 or sanctions were still a “red line for Moscow”.

Russian President Vladimir Putin vowed earlier on Tuesday to do everything to support Kofi Annan’s plan for ending the violence in Syria that the UN-Arab League envoy said had reached “unacceptable” proportions.

Annan arrived on Tuesday for his first meeting with the Kremlin chief since Putin’s return for a third term, hoping to avert a new Moscow veto of a Security Council resolution threatening sanctions against Russia’s ally.

Neither Putin nor other Russian officials offered any sign that they were ready to take a harder line with President Bashar al-Assad, however, or compromise on punitive measures against the regime’s brutal use of force.

“From the very start, from the first steps, we supported and continue to support your efforts aimed at restoring civil peace,” Putin told Annan at the start of their talks.

Annan replied that “the Syrian crisis is at a critical time” before the discussion was closed to the media.

The future of Annan’s three-month-old peace initiative, which was never implemented due to escalating violence, will be decided by the Security Council’s Friday deadline.

The council will determine whether to extend and enlarge the 300-observer UN mission, or wind it down.

Rebels declared the battle to “liberate” Damascus has begun as heavy fighting raged across the city on Tuesday and
Russia said an agreement is possible for a UN resolution on the Syria crisis.

The proclamation by the Free Syrian Army, which also claimed it had shot down a helicopter in the capital, came as heavy machine-gun fire was reported in Damascus’s Sabaa Bahrat Square.

At least eight people were killed as tanks and helicopter gunships were deployed in Qaboon district, while battles were fought in Midan and Hajar al-Aswad, said the Syrian Observatory for Human Rights.

As the fighting inched closer to the regime’s nerve centre, FSA spokesman Colonel Kassem Saadeddine said “victory is nigh” and that the fight would go on until the city was conquered.

“We have transferred the battle from Damascus province to the capital. We have a clear plan to control the whole of Damascus. We only have light weapons, but it’s enough.”

“Expect surprises,” Saadeddine added, before adding later that rebels had downed a helicopter over Qaboon, although an activist in the district said there was “no foundation” to the report.

Syrian security forces, meanwhile, say that the opposition is being “dealt with” in Damascus, denying media reports that “do not reflect facts on the ground”.

Fighting in the city has raged since Sunday, with the rebels announcing a full-scale offensive dubbed “the Damascus volcano and earthquakes of Syria.”

“The collapsing regime has gone mad,” the man calling himself Abu Musab said via Skype, adding that the Syrian army is “shelling everything”.

A column of smoke could be seen on Tuesday, billowing from the Midan district near the centre of Damascus, which has been pounded by regime troops since Monday. 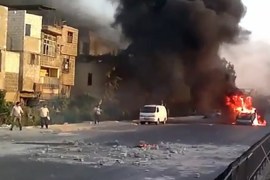 Violence rages in the Syrian capital

Fighting engulfs several Damascus neighbourhoods as Russia threatens to stall an extension of the UN mission in Syria. 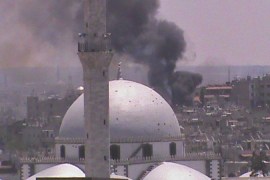 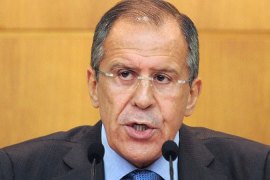 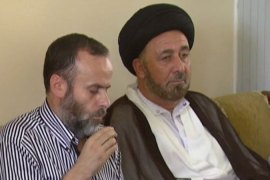 Members of minority sect say they are concerned about the increasingly sectarian tone of Syria’s uprising.