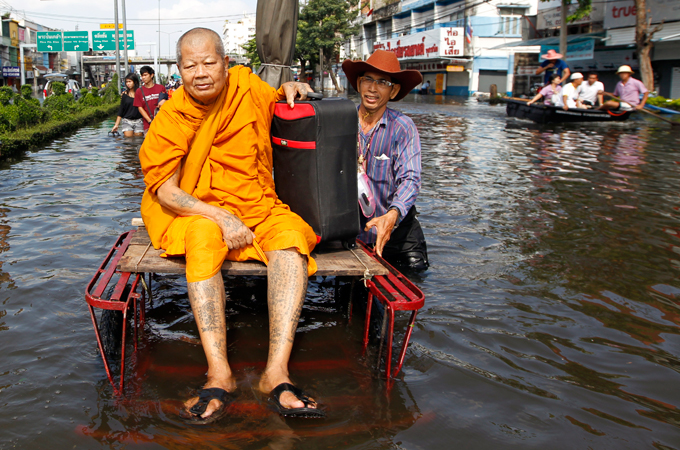 2011 was a year of devastating weather, with extensive floods in Thailand and droughts to Mexico and the Horn of Africa [EPA]

For years climatologists have told us that climate change increases the probability of extreme weather events occurring. However, they have always added that an individual event cannot be directly attributed to climate change.

Now climate scientists at the UK Met Office and Oregon State University in Corvallis are trying to challenge this.

The teams have looked back at the year of 2011, to try to determine if climate change is to blame for some of the natural disasters which were seen during the year.

Certainly 2011 was packed full of severe weather, including the extreme flooding in Australia, the severe droughts across the Horn of Africa and the above average Atlantic Hurricane Season.

The scientists believe that linking some of these individual events to climate change is possible, so long as it is framed in term of probability, rather than absolute certainty.

Amongst the many disasters of 2011 was a severe heatwave in Texas, an exceptionally warm November in the UK and severe floods in Thailand.

The weather in Texas would have been affected by the La Nina conditions which were prevailing in the Pacific Ocean. La Nina is the slight cooling of the surface waters of the Pacific, and this is known to affect the weather around the world.

However, event with La Nina conditions taken into account, the heat waves were exceptional.

In 2011, Texas suffered the hottest and driest growing season since records began in 1895, which resulted in a severe drought.

Scientists at Oregon State University in Corvallis calculated that climate change meant the heatwave was 20 times more likely that it would have been 50 years ago.

In the UK, the effects of climate change were even more pronounced. November 2011 was the second warmest on record. Scientists at the Met Office calculated that this was 60 times more likely than it would have been in 1960, thanks to climate change.

However, whilst the extreme weather in the UK and Texas were likely to have been exacerbated by climate change, the research also concluded that the flooding in Thailand couldn’t be blamed on climate change.

The capital, Bangkok, was inundated by flood waters in October, but the rains are simply the result of a very strong monsoon. Instead the scientists concluded that the problems were caused by changes to the management of rivers, which made the floods more severe than they otherwise would have been.

Linking individual weather disasters to climate change was also the focus of Inside Story, which can be seen here.