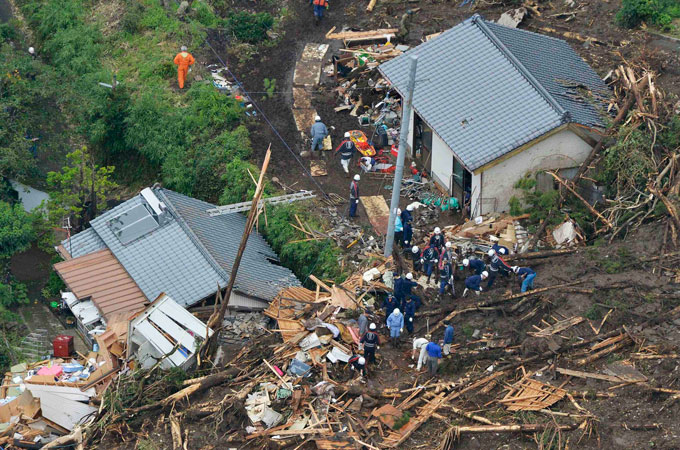 More than a month’s rainfall in less than 24 hours, caused a number of landslides across the island of Kyushu. [Reuters]

At least six people died and 18 were missing after unprecedented rains hit the Japanese island of Kyushu.

50,000 residents were ordered to evacuate as the rains fell during the early hours of Thursday morning.

At the peak of the rain’s intensity, some locations recorded over 100 mm of rain in just one hour.

Particularly badly hit were the prefectures of Kumamoto and Oita prefectures, where some locations reported over 500mm of rain in 24 hours. According to the Japanese Meteorological Agency, this is the heaviest rain that the region has ever experienced.

Emergency workers responded to multiple reports of mudslides swallowing houses and people being trapped by blocked roads or gushing water.

Self Defense Force troops have been deployed to the region, and the Prime Minister’s office in Tokyo has established a liaison office to coordinate efforts amongst the government ministries.

Kyushu sees abundant rain throughout the year and July is the wettest month, but the island only expects to receive around 340mm of rain in the entire month. On Wednesday night, some parts of the island received that in just 4 hours.

An additional problem for Kyushu is that the ground is already saturated; flooding was reported on the island just fourteen days earlier. The saturated ground means that the rains will not be able to soak into the soil, and instead will sit on the top, worsening the flooding problems.

The terrain in Kyushu is very mountainous, and with so much rain recently the ground will be weakened. This increases the vulnerability of the region to landslides.

100mm of rain falling in one hour would cause flooding problems anywhere in the world, but with the ground already saturated, the problems in Kyushu were unavoidable.

To make matters worse, more heavy rain is expected over the next few days.