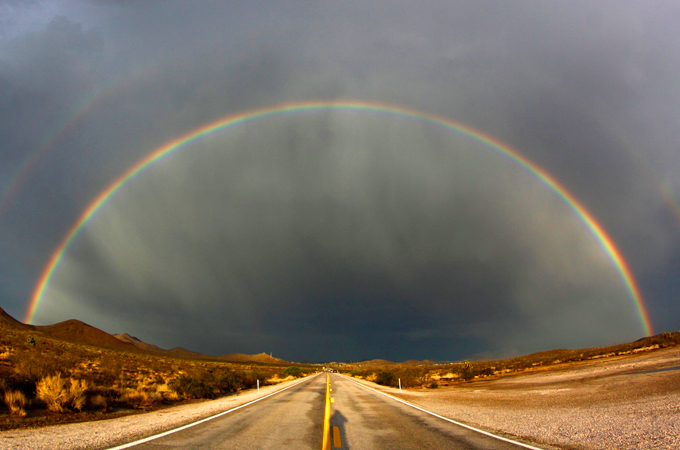 A double rainbow appears after a heavy monsoon storm over Nevada. [Reuters]

Internationally, when you mention the word monsoon, what normally comes to mind is the seasonal changing of winds that affects the Indian subcontinent and Asia. But on smaller scales it can also affect Australia, Europe, Africa as well as North America.

This past week it was in the American states of California, Nevada and Arizona that saw the start of their monsoon.

In spring and early summer this region typically sees very dry westerly winds. By mid-July the winds shift, to come from the south, bringing more humid air. The combination of this moisture rolling over the summer heated ground makes the air very unstable, leading to afternoon showers and thunderstorms.

This region is normally so arid, that when it does rain, the water can’t penetrate the baked soil and will cause extreme flash floods.

On Friday, near Lake Havasu City, Arizona, one person drowned in their car when it was swept into a flooded wash.  Flash floods can turn dry stream beds into rivers within seconds and dangerously catch people off guard.

All this damage can occur with just a little amount of precipitation coming out of these clouds. In Yuma, Arizona, 42mm of rain fell on Friday afternoon. It doesn’t sound like much, but this is equivalent to half of that the city would normally receive in an entire year.

Monsoonal thunderstorms can also be responsible for hail and damaging winds. In Phoenix a downdraft from one of these thunderstorms caused winds to gust up to 125kph and lower the visibility in the city due to blowing dust.

The North American monsoon can also be beautiful, bringing life and blooming vegetation back to the normally dry region.

More heavy thunderstorms are expected to occur into the beginning of the week, but the end of the monsoon will not officially finish until September.