An Israeli protester has set himself alight during a rally marking the first anniversary of a wave of demonstrations that swept the country against the high cost of living and other social issues.

Police spokesman Micky Rosenfeld said the man poured flammable liquid over himself at a protest in Tel Aviv on Saturday night and set himself on fire. He was later rushed to a hospital where he is being treated for serious burns, Rosenfeld said.

Israel’s Channel 10 TV showed footage of the man on fire. People crowded around, trying to put out the flames with shirts and water. People could be heard shouting “medic” and “bring water quickly”.

Israeli newspaper Haaretz reported that the man left a letter at the scene which said: “The state of Israel stole from me and robbed me. It left me helpless.”

He reportedly also blamed the government for “humiliation” and for “taking from the poor and giving to the rich”.

Cases of self-immolation as a form of protest are rare in Israel, and it was not immediately clear what prompted the man to set himself alight.

In 2005, a woman died of burns sustained after she set herself on fire to protest against Israel’s withdrawal from the Gaza Strip when the government evicted thousands of Israelis from their homes there.

Outside of Israel, the most famous recent case of self-immolation took place in Tunisia, where fruit-seller Mohammed Bouazizi set himself on fire in December 2010, helping set off the country’s uprising – and with it, the Arab Spring.

‘Social justice for everybody’

Saturday’s rally in Tel Aviv took place at the same time as one in Jerusalem.

Some of the few thousand people who turned out carried signs reading “social justice for everybody” and “stop exploiting us”.

Saturday’s demonstrations were part of an effort to re-energise a protest movement that began last July with complaints about housing prices but quickly shifted to a wide range of social economic issues like high food costs, low wages and better education.

Hundreds of thousands of people marched in the demonstrations last year, and protest camps sprouted up in city centres across the country.

About half a million Israelis took to the streets when the protest movement peaked last year.

Demonstrations dwindled out soon after the government set up a committee it said would provide solutions to the wide array of social issues plaguing Israelis.

Protest leader Daphni Leef said on Saturday at one of two separate Tel Aviv rallies that little has changed since then. 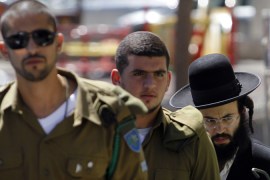 Criticism of the insular Haredi community at the heart of debate about the country’s identity. 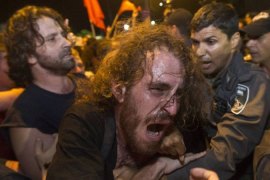 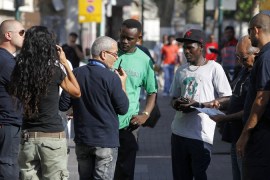 Israel turns up the heat on African migrants

Panic grips migrant community as many face deportation after being arrested during crackdown.