A new diplomatic row has flared between Japan and China over a remote chain of islands, after Beijing moved to assert an “indisputable sovereignty” over the uninhabited territories.

Gemba “strongly lodged a protest with the Chinese government with respect to the incident which took place this morning,” a foreign ministry spokeswoman told the AFP news agency in Phnom Penh.

The crews of the vessels, which have since left the islands’ immediate vicinity, initially rebuffed Japanese orders to leave.

“We are conducting official duty in Chinese waters. Do not interfere. Leave China’s territorial waters,” the crews said, according to the Japanese coastguard.

The Chinese ambassador in Tokyo was summoned over the alleged violation, but the Chinese foreign ministry said it did “not accept Japanese representations over this”.

Responding to Japan’s complaints, Chinese Foreign Minister Yang Jiechi countered to Gemba that the islands – known as Senkaku in Japanese and Diaoyu in Chinese – “have always been China’s territory since ancient times, over which China has indisputable sovereignty”.

The move came ahead of a summit of the 10-member Association of Southeast Asian Nations (ASEAN) due to start in Cambodia on Thursday.

While the issue is not on the formal agenda for the ASEAN summit, it was raised informally by members and discussed during a separate ASEAN-China dialogue on Wednesday.

A joint statement to be issued by ASEAN foreign ministers was also held up as countries wrangled over whether to include a reference to recent spats over the resource-rich area pitting China against Vietnam and the Philippines.

“ASEAN foreign ministers are having an emergency meeting to resolve the wording on the South China Sea in the joint statement,” one Asian diplomat told AFP news agency on condition of anonymity on Wednesday.

The islands lie in rich fishing grounds and are thought to contain valuable mineral reserves. Tokyo recognises a private Japanese family as their owner and the city government has said it plans to buy them.

It is the third time recently that China has clashed with its immediate neighbours over disputed territory and the row threatens to overshadow attempts to smooth regional relations at the security summit in Cambodia.

Asked about the incident, Philippine Foreign Minister Albert del Rosario told reporters: “It looks like they (China) are becoming more aggressive every day.”

The latest increase in friction had “surprised everybody”, he said.

The 10 members of Southeast Asian regional body ASEAN have been trying to agree a long-stalled “code of conduct” for the disputed South China Sea, home to vital shipping lanes, to help settle overlapping claims.

The Philippines is leading a push for ASEAN to unite and draw up a code based on a UN law on maritime boundaries that would delineate the areas belonging to each country. Beijing is unlikely to accept this, however.

Manila also wants ASEAN to condemn a standoff last month between Philippine and Chinese ships over Scarborough Shoal, an outcrop in the South China Sea.

This came as Beijing invited bids for exploration of oil blocks in waters claimed by Vietnam, which sparked protests on the streets of Hanoi.

China’s assertiveness in the resource-rich South China Sea is seen by analysts as pushing anxious neighbouring countries closer to the United States.

The islands at the centre of Wednesday’s dispute triggered a diplomatic crisis in late 2010 when Japan arrested a Chinese trawlerman who rammed his vessel into two Japanese patrol boats.

Hillary Clinton, US secretary of state, earlier arrived in Cambodia to press for closer relations with ASEAN as part of Washington’s strategy of “pivoting” towards Asia to challenge China’s influence.

A US official said on condition of anonymity that the friction between China and Japan would be discussed during a planned bilateral meeting between Clinton and Yang on Thursday. 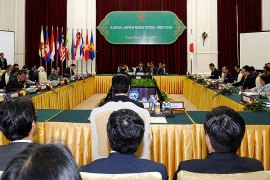 China and Southeast Asian nations argue over wording of code of conduct meant to ease tensions in South China Sea. 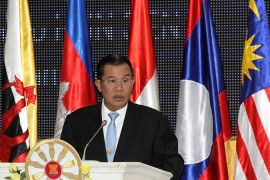 Southeast Asian nations meet in Cambodia to push for “code of conduct” to ease sea disputes with superpower China.