International envoy Kofi Annan has said he agreed with Syrian President Bashar al-Assad on an “approach” to end Syria’s conflict that would be put to the rebels.

“We discussed the need to end the violence and ways and means of doing so. We agreed on an approach which I will share with the armed opposition,” Annan told reporters after the meeting.

Annan arrived in Iran later in the day for talks with officials.

Tehran is a staunch ally of Damascus and has been accused by the Syrian opposition of aiding the regime in its crackdown.

Annan, visiting Damascus for the third time since the uprising began 16 months ago, is the architect of the most prominent international plan aimed at ending violence which has left thousands of people dead.

The six-point plan was to begin with a ceasefire in mid-April between government forces and rebels seeking to topple Assad, but the truce never took hold.

Almost 300 UN observers sent to monitor the cease-fire are now confined to their hotels because of the escalating violence.

In an interview with Le Monde on Saturday, Annan said that “the evidence shows that we have not succeeded”.

He stressed that those opposed to Western plans for resolving the crisis should not be sidelined.

“Russia wields influence, but I am not sure that the events will be determined by Russia alone … Iran is an actor. It has to be part of the solution. It has influence and we cannot ignore it,” Annan told the French newspaper.

Annan also expressed irritation that while Russia and Iran were mentioned by some as stumbling blocks to peace, “little is said about other countries which send arms, money, and have a presence on the ground”.

Assad, meanwhile, said he remained committed to Annan’s plan and accused the US of assisting “gangs” to destabilise his country, in an interview aired on German public broadcaster ARD on Sunday.

“As long as you offer any kind of support to terrorists, you are partner. Whether you send them armaments or money or public support, political support in the United Nations, anywhere,” said Assad.

Assad also refused to step down, saying he was staying put to deal with the “challenge” Syria is facing.

“The president shouldn’t run away from challenge and we have a national challenge now in Syria,” Assad said in English.

“The president shouldn’t escape the situation, but from the other side you can stay as president, stay in this position only when you have the public support.”

Anti-Assad activists in Syria reported army shelling and clashes with rebels on Monday in Deir al-Zor, Deraa, Homs, Aleppo and a neighbourhood of Damascus.

Meanwhile, Russia, which has thus far defended Assad from the threat of UN sanctions, said it would not deliver Yak-130 fighter planes or other new arms to Syria while the situation there remained unresolved.

“While the situation in Syria is unstable, there will be no new deliveries of arms there,” said Vyacheslav Dzirkaln, deputy
director of the Federal Service for Military Technical Cooperation, according to the Interfax agency.

The refusal to send more arms to Syria – a trade dating back to the Soviet era – may signal the most pointed move yet by
Moscow to distance itself from Assad as rebels have gained some ground and the death toll climbs.

The opposition says about 15,000 people have been killed since the uprising began in March last year. 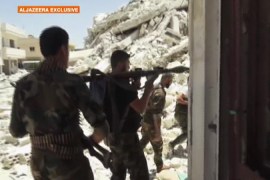 Exclusive report from al-Qusayr where an out-gunned Free Syrian Army is making progress against army. 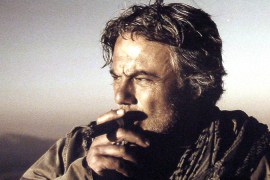 As one of Syria’s top generals has fled the country, we discuss the significance of this latest defection. 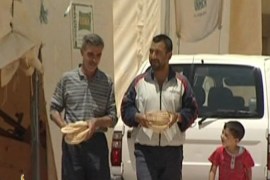 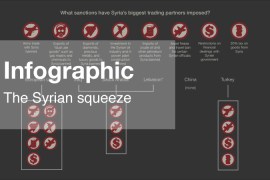 Diamonds, weapons and oil are at the centre of a sanctions regime targeting the rule of President Bashar al-Assad.