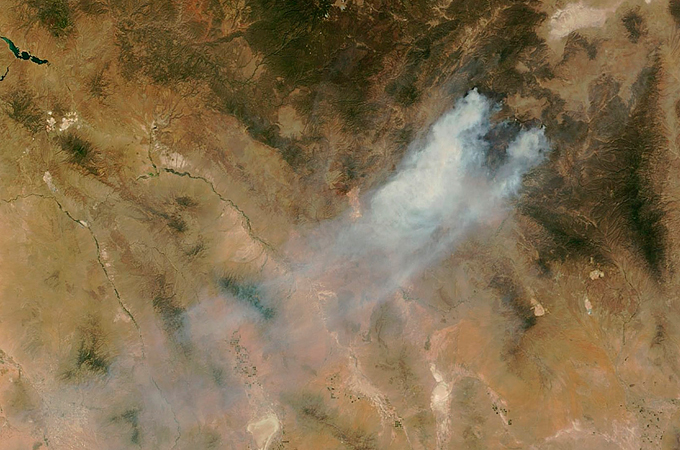 The largest wildfire that New Mexico has even seen is continuing to rage.

Triggered by a solitary lightning strike on 16 May, it has now has grown into a huge inferno. More than 1,200 firefighters are fighting to control the blaze, but so far with a limited amount of success.

In just over three weeks, 1050 km2 of rugged terrain have been burnt to a crisp.

Using ropes, specialized “hotshot crews” have had to rappel from helicopters in order to reach some of the more isolated areas.

The Gila National Forest, where much of the fire is burning, is an area of natural beauty from the diverse landscapes of rugged mountains, deep canyons, meadows, and semi-desert country.

The forest has seen wildfires before; it is a normal part of evolution in a forest. Ordinarily these fires are managed and watched, rather than immediately extinguished, allowing nature to periodically purge its dangerous natural fuels, such as dry grasses and dead woods. However, when a fire becomes dangerous, then efforts are made to control and extinguish it.

For the last few weeks, weather conditions across the region have raised the risk of wildfires not only in New Mexico, but also across much of the Southwestern US. High temperatures, gusty winds and low humidity are the ideal conditions for triggering and spreading wildfires.

So far there is no immediate threat to Glenwood, New Mexico, the closest community to the blaze, but residents have been immersed in a thick haze of smoke for days. At night, the ridgeline in the distance lights up the sky with flames.

While no fatalities have been reported, dozens of buildings have been lost. Officials say that it could be several more weeks before the fire is completely contained.