Skygazers around the world have held up their telescopes and viewing glasses to watch a once-in-a-lifetime event as
Venus slid across the sun.

The six-hour-40-minute visible transit began at 22:09 GMT on Tuesday at sunset in eastern North America and northwestern South America and was seen as a small black dot on the solar surface.

All of the transit was visible in East Asia and the Western Pacific, although poor weather conditions spoiled the view for some.

Venus crosses the sun about twice every hundred years or so, in sets about eight years apart. Its last passage was in 2004, and the next will be 2117.

The event was covered extensively online, with live video and pictures from an armada of space- and ground-based observatories.

Even astronauts aboard the International Space Station were joining in the event.

“I’ve been planning this for a while,” space station flight engineer Don Pettit said in a NASA interview. “I knew the transit of Venus would occur during my rotation, so I brought a solar filter with me.”

Scientists were also monitoring the transit to collect experimental data, including for a study intended to help in the search for habitable planets beyond Earth.

Telescopes, such as NASA’s Kepler space telescope, are being used to find so-called extra solar planets that pass in front of their parent stars, much like Venus will pass by the sun. During the transit, astronomers will be able to measure Venus’ thick atmosphere and use the data to develop techniques for measuring atmospheres around other planets.

Studies of Venus’ atmosphere also could shed light on why Earth and Venus, which are almost exactly the same size and orbit approximately the same distance from the sun, ended up so different.

Venus has a chokingly dense atmosphere 100 times thicker than Earth’s that is mostly carbon dioxide, a greenhouse gas that heats up Venus’ surface to 482 degrees Celsius.

The weather is brutal, with towering clouds of sulfuric acid that jet around the planet, regularly dousing the planet with acid rain.

“A human being transported to this hellish environment would be crushed, suffocate, desiccate, and possibly ignite,” wrote Tony Phillips, with Science@NASA.

Scientists are interested in learning more about Venus’ climate, hoping to understand changes in Earth’s atmosphere.

During previous transits of Venus, scientists were able to figure out the size of the solar system and the distance between the sun and the planets.

Tuesday’s transit is only the eighth since the invention of the telescope in the 17th century. It also is the first to take place with a spacecraft near Venus.

Observations from Europe’s Venus Express probe will be compared with those made by several ground and space-based telescopes including NASA’s Solar Dynamics Observatory, the joint US-European Solar and Heliospheric Observatory and Japan’s Hinode spacecraft.

Armchair astronomers have a rich choice of websites to monitor. NASA’s compilation will also be viewable.

Owners of mobile devices using Apple and Android operating systems could download a free application to learn about the transit, interact with skywatchers and track the transit as it occurred around the world. The app is available online on several websites. 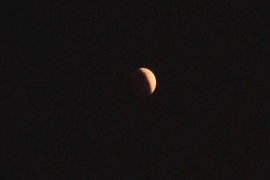 Stargazers delight in rare celestial show, in which earth casts shadow over the moon, turning it red. 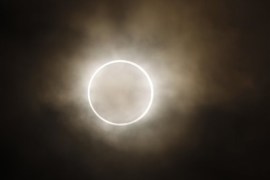 In Pictures: ‘Ring of Fire’ eclipse 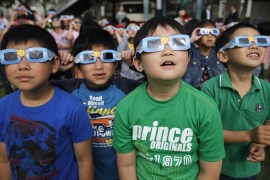 Millions across Far East and US treated to celestial special effects as moon and sun align in rare annular eclipse.