Human body parts have been discovered in packages mailed to two schools in the Canadian city of Vancouver, police say.

The gruesome findings came a week after packages containing a hand and a foot of a Chinese student were mailed to Canada’s top political parties, but police could not immediately confirm if the extremities discovered on Tuesday were linked to the same murder.

Luka Rocco Magnotta, 29, was arrested on Monday at a Berlin internet cafe on suspicion he murdered 33-year-old Jun Lin in Canada last month with an ice pick and hacked apart his body while filming the grisly killing. He is expected to be extradited from Germany.

“The investigation will centre on identifying the victim and from where the packages were mailed. Investigators will liaise with any outside police agencies as required,” police said.

One of Lin’s hands, a foot and his head are still missing.

His torso was found in a suitcase left for rubbish collection outside Magnotta’s Montreal apartment, which police said was virtually covered in blood.

“We found blood on the mattress, on the tables, in the refrigerator and in the freezer,” said Commander Denis Mainville from Montreal’s major crimes unit.

Video footage of what authorities believe to be the killing seems to show the suspect eating the body, according to police in Montreal.

Montreal Police Commander Ian Lafreniere said that although police have not been able to conclusively confirm it, they suspect Magnotta ate parts of the victim’s body.

“As gross and as graphic as it could be, yes, it was seen on the video,” Lafreniere said.

With the help of Magnotta’s mobile phone signal, police traced him to a hotel in the Parisian suburb of Bagnolet, and then to an international bus station in Paris where video surveillance footage showed he had boarded a bus to Germany.

An employee at the internet cafe reportedly recognised him from a newspaper photo and flagged down a police car.

Catherine Tramell was the main character in the 1992 film “Basic Instinct”. Played by Sharon Stone, she uses an ice pick to murder a lover. 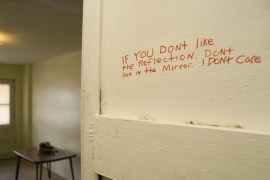 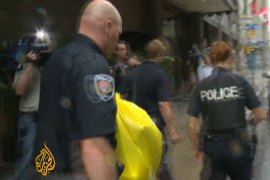 Police say severed foot sent to ruling Conservative party was not linked to organised crime, as they name a suspect.