Soldiers of the Democratic Republic of Congo army and rebels have clashed at an army base in the country’s east, killing at least 19 people in the latest outbreak of violence that has forced tens of thousands to flee their homes.

DRC officials said on Wednesday that the attack had been carried out by Mai Mai fighters, linked to former rebels who were at one point integrated into the army but deserted in recent weeks over the government’s decision to arrest a renegade general, Bosco Ntaganda.

Their uprising is believed to have dragged in armed fighters from neighbouring Rwanda, complicating fragile relations between the two neighbours. Clashes in the last two months have forced more than 100,000 people to flee their homes.

“They attacked our barracks and killed some of our military personnel,” he said, adding that 11 Congolese soldiers and 8 rebels were killed.

Lafontaine told Reuters news agency that his men had suffered one fatality and killed 31 soldiers in the clashes, adding that his forces had seized ammunition and arms, including a mortar.

Reuters could not independently confirm the casualties.

He said the soldiers had attacked the rebels’ positions in Kasiki, in North Kivu.

“But we pushed them back as far as their base,” Lafontaine said by telephone from Lubero territory.

Lafontaine – known as Mai Mai Lafontaine – is a longstanding rebel and former head of the PARECO armed group.

Earlier this year he launched a new movement called UPCP with Colonel Albert Kahasha, one of hundreds of soldiers who mutinied after the DRC government said it would arrest Ntaganda, wanted by the International Criminal Court for war crimes.

In a separate speech on national television on Tuesday night, Mende said that 200 soldiers loyal to Ntaganda had been
killed since the rebellion started at the end of March, and more than 370 have surrendered, including 25 Rwandan citizens.

Rwanda has denied suggestions by the UN and Human Rights Watch, the New York-based organisation, that elements within its military have been providing weapons and recruits for the mutineers, known as M23. 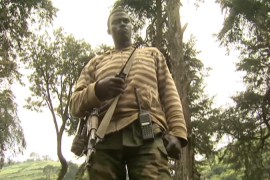 Rights group says rebels are being funded and supported by neighbouring government. 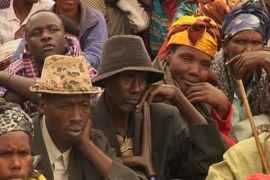 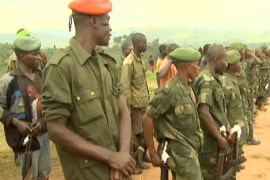 Fighters in the country’s east hope a joint force would put up stiff resistance against government troops. 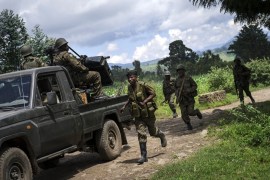 Face to face with the rebels of DR Congo

During a lull in the fighting, Al Jazeera talks to Congolese rebel group M23 about their political goals.