A suicide car bomber has struck near a church on the outskirts of the northern Nigerian city of Bauchi, with witnesses and officials reporting at least 15 fatalities, not counting the suicide bomber, and more than 30 people injured.

The bomber targeted the Living Faith church on Sunday morning, in the neighbourhood near the airport in Bauchi, the capital of Bauchi state, after driving into a church compound.

Al Jazeera’s Yvonne Ndege, reporting from the capital Abuja, said the bomb was detonated at a police checkpoint.

“In this instance, the attacker tried to get past a barricade and police moved in to investigate. In that process, the device went off. Police say eight people were killed, including the bomber, and the Red Cross said more than 30 people being treated in hospital,” she said.

“Police tend to feel they were able to thwart the attack somewhat, and the [death toll] would have been much worse if, indeed, the suicide bomber had been able to penetrate the building.”

Boko Haram, the radical Islamist group, claimed responsibility on Monday for the blast.

“We thank God for giving us victory. We successfully carried out a sucide bombing on a church at Yelwa in Bauchi state,” an emailed statement from Abu Qaqa, Boko Haram’s spokesman, said.

Sunday’s blast caught many people outside the church without any cover to protect themselves from the explosion, causing heavy casualties, witnesses said.

Mohammed Ladan, the Bauchi state police commissioner, said security personnel stationed near the church compound stopped the car from getting any closer to worshippers than it did.

The blast from the car destroyed part of the church walls on worshippers still inside while others suffered burns in the blast.

The group has been largely quiet since claiming a suicide car bombing and another attack at offices of the Nigerian newspaper ThisDay on April 26 that killed at least seven people.

Boko Haram opposes Western-style education and wants Nigeria, which is roughly divided between the predominantly Muslim north and Christian south, to adopt Sharia law throughout the country. 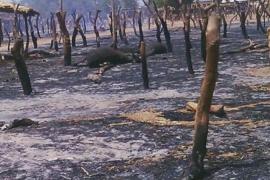 At least 60 people dead after bomb and gun attack on a cattle market in the country’s northeast. 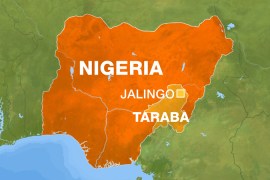