The deposed Paraguay president Fernando Lugo has branded the country’s new government illegitimate and called for a return to democratic rule following his sudden impeachment two days ago.

Lugo, 61, a leftist former Roman Catholic bishop, said on Sunday his removal from office was “a parliamentary coup against the will of the people” and said he would back any peaceful effort to restore democracy in the soy-exporting South American nation.

Congress voted overwhelmingly on Friday to remove Lugo from office on Friday, saying he had failed in his duty to maintain social order following a bloody land eviction.

Under the Paraguayan constitution, the impeached president was replaced by Vice-President Federico Franco, a vocal critic of Lugo for much of his presidency. Lugo was one year away from completing his five-year term.

Paraguay is one of the poorest countries in South America and Lugo pledged to improve the quality of life of low-income families when his election ended six decades of rule by the Colorado party.

However, he struggled to push reforms, including land redistribution to poor peasant farmers, through congress.

A cancer scare and several paternity scandals dating back to his time as a bishop added to his difficulties.

Franco, the one-day-old president, said he would ask his impeached predecessor to help quell the regional tensions, but Lugo refused to help him.

“We support any kind of peaceful effort aimed at restoring institutional order that was interrupted by parliament,” Lugo said, adding that he would not collaborate with a “fake” administration.

“This is a fake government. You can’t collaborate with a government that doesn’t have legitimacy.”

South American neighbours have stepped up criticism of Lugo’s rapid impeachment by an opposition-dominated congress,.

Hugo Chavez, Venezuela’s president, halted oil shipments to Paraguay on Sunday and withdrew his ambassador from the country.

Argentina withdrew its ambassador on Friday in protest at what it said was a “coup” against Lugo and Brazil recalled its top diplomat for consultations.

Lugo said he would attend a summit of the regional trade bloc Mercosur later this week.

Cristina Fernandez, the Argentine president, said on Saturday that  Mercosur could take measures against Paraguay. In theory, that could include suspension from the group, which also brings together Argentina, Brazil and Uruguay.

Latin America’s more radical left-wing governments have led the protests with Venezuela, Bolivia, Ecuador, Cuba, Nicaragua and Argentina saying they would not recognise the new government and pledging to lobby for sanctions against it.

Peru and Mexico also questioned the speed of the process to remove Lugo from office, although Mexico recognised the legality of the impeachment. 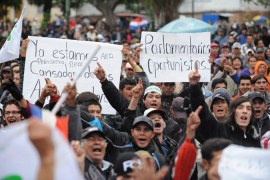 President Fernando Lugo ousted for malfeasance while in office as his supporters clash with riot police in the capital.

Heads of three regional countries say they will not recognise new government after President Fernando Lugo was ousted.