The US embassy in Kenya has warned of an imminent threat of an attack on the Kenyan port city of Mombasa and asked all its government workers to leave the coastal town, which has been hit by a series of attacks in the past.

Underscoring the threat, police said they recovered suspected bomb-making material in the capital Nairobi on Saturday, the second such discovery this week in the country.

The US embassy said in a statement dated June 22 on its website that it had also suspended travel for its government officials to Mombasa, a tourist destination popular with foreigners, until July 1.

Mombasa, the capital Nairobi and other parts of Kenya have suffered a series of grenade attacks since Kenya sent troops into Somalia last year to pursue al-Qaeda-allied al-Shabab fighters it blames for a surge in violence and kidnappings threatening tourism in east Africa’s biggest economy.

“This is to alert all US citizens in Kenya, or planning to travel to Kenya in the near future, that the US Embassy in
Nairobi has received information of an imminent threat of a terrorist attack in Mombasa,” the embassy statement said.

The embassy said private citizens would not face the same restrictions, but advised them to heed the warning while planning their travels.

The warning comes days after police arrested two Iranians after seizing chemicals they suspected were going to be used to make explosives in Mombasa.

In the most recent attack in the country, a bomb exploded in a trading centre in the heart of Nairobi in late May, wounding more than 30 people. One person later died from injuries.

Armed men also detonated grenades outside a nightclub in Mombasa in May, killing one person and wounding several others.

On Saturday, Anthony Kibuchi, Nairobi’s police commander, said police had recovered a bag of what appeared to be detonators labelled “Magnum Buster. Danger explosives” in a city neighbourhood.

“We are on hot pursuit of the suspects,” Kibuchi told Reuters news agency, saying they were looking for three people.

Two police officers were wounded in an explosion from an improvised device in the north eastern town of Mandera.

“The two officers were hit and injured by an object. We believe it is an improvised explosive device,” Ndolo told Reuters by telephone. 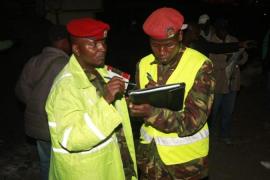 Development follows warning from US and French embassies of “imminent attack” on port city of Mombasa.