Egypt’s election commission has said the results of the presidential runoff will be revealed on Sunday, as thousands of supporters of the Muslim Brotherhood continue to protest in Cairo’s Tahrir Square.

They are demonstrating against what they say is a power grab by the military and an attempt to limit presidential power.

Supporters of former prime minister Ahmed Shafiq and the country’s military rulers are also holding parallel protests in the suburb of Nasr city, north of Cairo.

This was the largest show of force by pro-Shafiq, pro-military demonstrators since the election.

They raised Egyptian flags and posters of Shafiq and chanted, “Down, down with the rule of the Guide”, referring to the title of the Brotherhood’s movement leader.

The election commission overseeing the divisive contest between Mohamed Morsi, the Brotherhood candidate, and Ahmed Shafiq said it would announce the official winner on Sunday.

Both Morsi and Shafiq have claimed victory in the election for a successor to Hosni Mubarak, escalating tensions between the rival camps that have deepened after the electoral commission delayed announcing the official outcome.

The delay in the announcement of the result of the June 16-17 runoff, initially scheduled for Thursday, has raised suspicions that the outcome of the election is being negotiated rather than counted.

Al Jazeera’s Jamal El Shayyal, reporting from Cairo, said there is an increased level of mistrust in Egypt.

“Egypt has become more and more unpredictable day by day,” he said. “There is an increased level of mistrust, and this will be one of the most difficult challenges for the new president to overcome, trying to bridge the differences between the sides.”

As the ruling Supreme Council of the Armed Forces (SCAF) and the Brotherhood clashed publicly over recent measures that consolidated the army’s power, privately they have been engaged in talks, sources say.

The Brotherhood rejects a constitutional declaration by the SCAF which erases any gains made by the group since the popular uprising which forced Mubarak to step down in February last year.

The document dissolves the Islamist-led parliament and gives the army a broad say in government policy and control over the new constitution. It was adopted just days after a justice ministry decree granted the army powers of arrest.

The SCAF has defended its constitutional declaration, which also erased the president’s role as commander-in-chief and gave the military autonomy over its own budget and personnel decisions.

“The issuing of a constitutional declaration was a necessity imposed by the needs of managing the affairs of the country during the current critical phase of the history of our nation,” it said on Friday.

The SCAF also gave warning it would deal “with utmost firmness and strength” with any attempts to harm public interests.

For its part, the Brotherhood cautioned against tampering with the election results but said it had no intention of instigating violence.

Even if Morsi wins, the changes leave the Brotherhood with no parliament, no say in the constitution and a powerless president.

“It’s a problem which we are trying to resolve,” one Brotherhood official said earlier.

The developments come amid conflicting reports over who would be declared the election winner.

“Morsi to be declared the winner today. Unless,” read Saturday’s headline of the independent daily Al-Shorouk.

The liberal daily Al-Wafd said on its front page: “Shafiq is close to the presidential palace.”

The election has polarised the nation, dividing those who fear a return to the old regime under Shafiq’s leadership from others who want to keep religion out of politics and fear the Brotherhood would stifle personal freedoms.

Shafiq ran on a strong law-and-order platform, pledging to restore security and stability.

Morsi, on the other hand, sought to allay the fears of secular groups and the country’s sizeable Coptic Christian minority by promising a diverse and inclusive political system.

The English website of state-owned Al Ahram newspaper cited on Friday government sources who said Shafiq would be declared the winner, while the Arabic website cited election committee sources who said Morsi was still in the lead.

The Brotherhood has released photocopies of official counts from every district in Egypt showing Morsi with a lead of around 900,000 votes, but those results are not final until the election committee rules. 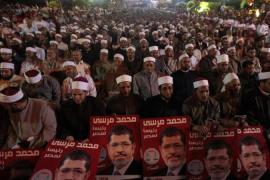 Movement enters into a battle to counter moves by the ruling military council to extend its powers. 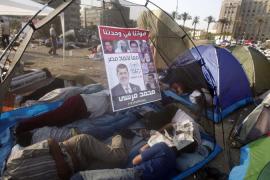 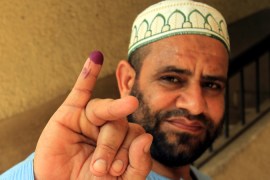 Egypt: The media’s role in politics

We examine Egypt’s media and the politicians they are covering in the country’s landmark election.