The head of the suspended United Nations’ observer mission to Syria has told the Security Council his monitors were repeatedly targeted by hostile crowds, but that the mission is morally obliged to stay in the country.

Major General Robert Mood told the 15-nation security council on Tuesday that his 300-strong unarmed observer force was targeted with gunfire at least 10 times last week and nine vehicles were damaged, according to a UN diplomat who attended the closed- door breifing.

The mission was suspended on Saturday after Mood, a Norwegian, said the risk to the unarmed observers was too great.

Mood said that the UN monitors were “morally obliged” to stay in Syria even though escalating violence has halted operations, but that a return to full patrols was unlikely unless President Bashar al-Assad and the Syrian opposition show “a demonstrable commitment to de-escalate” hostilities.

“We made that decision based on risks on the ground, which made it extremely difficult to implement mandated tasks,” Mood said at a press conference later on Tuesday.

Bashar Jaafari, the Syrian ambassador to the UN, said armed groups were violating the Kofi Annan peace plan, and its implementation was important for the Syrian people.

“The only way to push forward is to guarantee the success of the six-point plan of Mr Kofi Annan,” he said.

Herve Ladsous, the UN peacekeeping chief, also briefed the council. Ladsous had said last week that Syria was now in the throes of a full-scale civil war.

More than 3,300 people have been reported killed in violence across Syria since the observers were deployed in mid-April.

Their 90-day initial mandate runs out on July 20.

Annan’s six-point plan calls for an immediate cessation of fighting, first by the Syrian government and then the opposition, with the goal of launching a political dialogue.

The briefing came amid renewed government shelling of several neighbourhoods in the central city of Homs, according to activists.

The Syrian government has said it was trying to evacuate civilians from Homs and blamed rebel fighters for obstructing efforts to get people out safely.

“Contacts have been made with the leadership of the international monitors, in co-operation with the local Syrian authorities in the city of Homs to bring out these Syrian citizens,” Syria’s foreign ministry said on Tuesday.

“But the efforts of the monitors were unsuccessful … because the armed terrorist groups obstructed their efforts,” it said, using a label Syria employs to describe rebels who have joined the 15-month uprising and seek to topple Assad by force.

It accused the rebels of using civilians as “human shields”.

Hadi al-Abdallah, an activist in Homs, told Al Jazeera by phone from Homs that the accusations of the regime are “ridiculous”.

“We contacted the UN observers and Red Cross many times to come to the beseiged neighbourhoods in Homs, but they told us that the regime was preventing them from entering to rescue civilians,” he said.

Tens of thousands of people have already fled from Homs to other cities to escape months of bombardment and street fighting.

“It is wrong to assume that there are three parties to the conflict: the regime, the Free Syrian Army and the civilians,” Abdallah said.

“There are only two parties. The criminal regime on one side and the civilians and Free Syrian Army on the other.”

Abdallah said that civilians in Homs “have clearly expressed their support for the Free Syrian Army during anti-Assad rallies”.

There has also been fighting in the city of Deir Ezzor where the government crackdown continues. The state news agency Sana said oil pipelines have been attacked by armed groups there.

There were also reports of clashes between troops and opposition fighters in the northern Aleppo province.

In a seperate development, US President Barack Obama said on Tuesday that China and Russia are “not aligned” with the US and other nations on Syria, but says both countries’ leaders recognize the dangers of a civil war.

Obama’s comments at the end of the Group of 20 meeting of the world’s largest economies came after Russian President Vladimir Putin said only the Syrian people have the right to decide whether Assad steps down.

“I don’t see a scenario in which Assad stays and violence is reduced,” Obama said.

Putin defended Russia’s policy of non-intervention in Syria by saying that outsiders have no right to interfere in other countries.

“We believe that nobody has the right to decide for other nations who should be in power and who should not,” Putin told reporters after a G20 summit in the Mexican beach resort of Los Cabos.

Russia has been the staunchest backer of Assad and his military crackdown against the opposition in Syria, including supplying arms to the Syrian government.

However, David Cameron, the British prime minister, said Putin had shifted his view of the Syrian leader.

“There remain differences over sequencing and the shape of how the transition takes place but it is welcome that President Putin has been explicit that he does not want Assad remaining in charge in Syria,” Cameron told reporters on Tuesday.

“What we need next is an agreement on a transitional leadership which can move Syria to a democratic future that protects the rights of all its communities.”

Meanwhile, the US military said Russia was preparing to deploy three naval ships to Syria for a mission that Moscow says is purely designed to ferry supplies to its base at the port of Tartus.

“Russian citizens have been threatened there in Syria, and their stated intention is that this is for force protection reasons of their own. That’s what we believe to be the case,” Pentagon spokesman Captain John Kirby told reporters.

Earlier on Tuesday, a Russian cargo ship allegedly carrying attack helicopters to Syria was turned back from British waters after its insurance coverage was revoked. 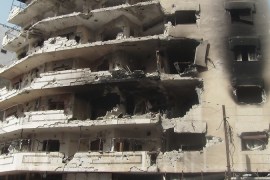 US and Russian leaders agree on goal of international intervention but propose no new tactics for stopping bloodshed. 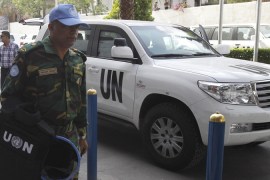 Has the UN observer mission failed in Syria?

As the UN suspends its mission amid rising violence, we ask how their withdrawal could impact the Syrian people. 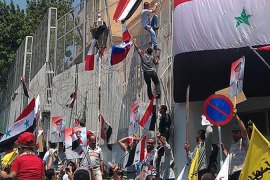 Can US and Russia agree on saving Syria?

We ask if either country will set aside political differences to formulate a viable plan to end 15 months of violence.