Aung San Suu Kyi has started an emotional return to Britain, during which she will be showered with honours and have a long-awaited family reunion after nearly a quarter of a century in Myanmar.

The democracy icon arrived in Britain on Tuesday overnight from Ireland, where she took to the stage at a gala concert with U2 singer Bono to receive a prize from rights group Amnesty International.

She was later given an award in Dublin at a special ceremony in which crowds joined in singing “Happy Birthday” as she was given a cake to mark her 67th birthday, which is on Tuesday.

In Britain for the latest leg of a 17-day tour of Europe, Suu Kyi will attend a family reunion in the southern city of Oxford, where she studied at the university and lived for several years with the late Michael Aris, her English husband and father of her two sons.

The Chancellor of Oxford University, former Hong Kong governor Chris Patten, will formally welcome her, as will the head of her former college, St Hugh’s.

On Wednesday, Oxford University – where she studied politics, philosophy and economics – will award her an honorary doctorate in civil law and she will also deliver a speech in the grand surroundings of the 17th-century Sheldonian Theatre.

On Thursday, Suu Kyi is to address both houses of parliament in London, an honour only granted to high-profile foreign dignitaries such as US President Barack Obama.

She will also meet Prime Minister David Cameron and heir to the throne Prince Charles.

Suu Kyi said at the weekend that she hoped the trip to Oxford in particular would not be “tinged with sadness”.

She spent nearly 20 years in the city with her family. When she left for Myanmar to care for her dying mother in 1988 she had no idea that it would be 24 years before she would return.

Suu Kyi became the leader of the country’s democracy movement against its military rulers, spending most of the following decades under house arrest.

She refused to leave the country, fearing that the junta would prevent her from returning and keep her in exile.

The painful result was that she only saw her husband and children a handful of times in the intervening years. Aris died of cancer in 1999, having told her not to come back but to continue her struggle.

Her younger son Kim, now 35, still lives in Oxford and is expected to attend the reunion, but it was not clear if her older son Alexander, 39, who reportedly lives in a Buddhist retreat in Portland, Oregon, would be there.

An emotional Suu Kyi delivered her Nobel lecture at Oslo City Hall on Saturday, more than two decades after receiving the peace prize awarded to her in 1991.

She was unable to accept it at the time and Alexander, then 18, delivered a speech on her behalf.

In Norway on Sunday, she co-hosted a peace forum with Bono before travelling to Dublin on Monday in the star’s private jet.

In Ireland, Suu Kyi received Amnesty International’s Ambassador of Conscience Award at a concert with performances by stars including Benin singer Angelique Kidjo and US rapper Lupe Fiasco.

She won the award in 2009, but was under house arrest in Myanmar at the time.

“To receive this award is to remind me that 24 years ago I took on duties from which I shall never be relieved but you have given me the strength to carry out,” Suu Kyi said.

Bono thanked Suu Kyi for being at the concert, saying: “We are humbled. We are grateful.”

Suu Kyi’s tour has been clouded by continued violence in western Myanmar where dozens of people have been killed and more than 30,000 people displaced by clashes between Buddhist Rakhines and stateless Muslim Rohingya. 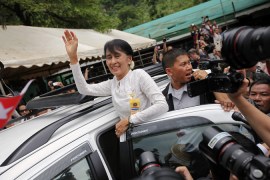 Opposition leader visits refugee camp on Thai border, telling displaced Karen she will try to get them back to Myanmar. 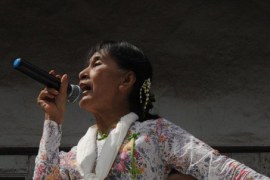 Myanmar democracy icon who spent most of past 21 years under house arrest to formally accept her 1991 Nobel Prize. 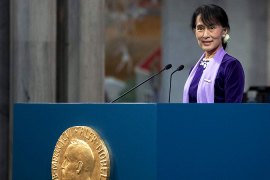