Egyptians are voting in a runoff presidential election that takes place with the country’s post-revolutionary politics in turmoil after the supreme court dissolved parliament and the country’s military rulers re-asserted control over the legislative process.

Voters queued up outside polling stations early on Saturday, and Egyptians have until Sunday evening to cast their ballots in an election that pits Mohammed Morsi, the Muslim Brotherhood’s candidate, against Ahmed Shafik, the last prime minister under deposed president Hosni Mubarak.

Morsi, who finished first in last month’s first round of voting, has tried to portray himself as the candidate of the revolution, while Shafik, who finished second, has promised to restore stability.

Whichever man wins, he will take office amid a great deal of uncertainty. The Supreme Council of the Armed Forces (SCAF) formally moved to dissolve parliament on Friday, and told MPs they were not allowed to re-enter the building.

Our correspondent in Cairo, Mike Hanna, said: “There is no parliament, constitution and the military holds both legislative and executive power basically ruling by decree.

“That is the circumstances under which Egyptian are going to vote for the man that will be the next leader of this country. Not knowing exactly what powers that president will have.”

The Muslim Brotherhood, whose Freedom and Justice Party (FJP) controls the largest bloc in parliament, has said it will not immediately accept the court’s ruling. Saad al-Katatni, the parliament speaker, plans to hold a session next week to discuss the decision.

The high court ruled that some provisions of the electoral law, which allowed political parties to compete with independent candidates for some seats, violated the constitution.

The ruling invalidated the 508-member People’s Assembly, chosen during a six-week election which began in November. It also voided the constitutional assembly which members of parliament agreed to last week and appointed on Tuesday.

SCAF said it will announce its own assembly next week.

The ruling was a blow to the entire transition process, but perhaps most of all to the Brotherhood, which controlled nearly half of the assembly.

Mohamed el-Beltagy, a senior FJP politician, called the rulings a “fully-fledged coup” on his Facebook page.

The Brotherhood issued a statement late on Thursday night warning that the court’s decision would undo the gains of the revolution and push Egypt into “dangerous days”.

The court also ruled that Shafik was eligible to stand in the election. He was initially barred from running by the “political isolation” law passed earlier this year, which barred ex-regime officials from running for public office.

The court dismissed the law as unconstitutional.

Morsi has been under pressure from Egypt’s liberals to declare the election illegitimate and withdraw from the race.

But Nader Omran, a spokesman for the FJP, said in an interview that he would continue his campaign despite concerns over the rulings.

“It’s a political [decision], not a judicial one,” said Omran.

“We have to go on with the elections, we have to not give any chance for the counter-revolution[ary] powers … Shafik will not win a free and fair election, never.”

The next president will take office without a clear mandate – there is no constitution spelling out the powers of the president – and without an elected legislature.

SCAF announced on Thursday that it would assume lawmaking powers after parliament’s dissolution. And on Friday, the generals said they would manage the budget as well, according to Al-Ahram.

Earlier this week, the justice ministry issued a decree allowing the military to arrest civilians for a range of crimes, further empowering the military and raising comparisons with the country’s recently scrapped emergency law..

“I think that in the coming days, weeks, SCAF will issue what we call a supplementary constitutional declaration by which it will try to further specify the powers of the new president,” said Mazen Hassan, a legal scholar at Cairo University.

“Electing a president in the absence of [a] constitution and parliament is electing an emperor with more powers than [the] deposed dictator,” he said on Twitter. 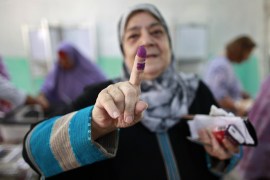 In Pictures: Egyptians go to the polls

Voters in Egypt cast their ballots to decide who will be the country’s first post-Mubarak president. 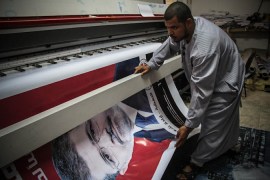 From protests to the print shop 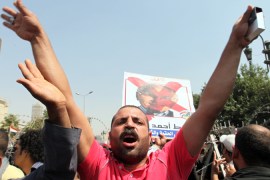 Court ruling to dissolve parliament leads Brotherhood to warn of “dangerous days” such as those under Mubarak regime.