Police have used tear gas and water cannons against football fans after fighting broke out between Russian and Polish supporters ahead of the countries’ Euro 2012 match in Warsaw that ended in a 1-1 draw.

Police said more than 100 arrests were made after Tuesday’s clashes and that 10 people were injured.

Before the game, Russian fans clashed with police on a bridge near the National Stadium.

Riot police and vans had created a buffer as about 5,000 Russian fans began crossing the Vistula river towards the stadium chanting “Russia, Russia” and waving flags on what was also Russia’s national day.

Some Polish fans yelled verbal abuse at the Russian marchers, who responded by hurling back bottles. The two sides kicked and beat each other in the face, while flares could be seen exploding in their midst.

The two countries share a difficult history, including decades of control by Moscow over Poland during the Cold War.

Later, during the match, new fighting apparently unrelated to nationalist tensions broke out among Polish fans near the fan zone. Police responded with rubber bullets and tear gas and made some arrests.

Poland’s Interior Minister Jacek Cichocki had earlier said the security operation surrounding the match in the capital was the city’s “greatest-ever challenge”, as Polish newspapers played up the match with military language and historical references.

“It won’t be a simple march across Warsaw, alas, but massive air raids against the Polish net,” the centre-left Gazeta Wyborcza newspaper stated. “Above all, we must survive this match.”

At least 12,000 Russian fans were in the city for match day.

About 6,000 policemen are on duty in the capital for the duration of the high-profile tournament.

“Drunk fans both in the city centre and on the outskirts of Warsaw after the game – especially around midnight – that’s a real concern to us,” Donald Tusk, the prime minister, said.

But the 1-1 result appeared to have eased the post-match mood on Tuesday, with no major incidents reported after midnight, as Poles celebrated their chance to advance in the 16-nation quadrennial tournament they are co-hosting
with Ukraine. 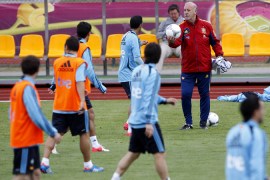 Find out when all the action takes place during the Euro 2012 tournament in Poland and Ukraine. 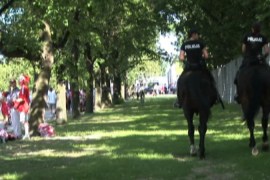 The police in Warsaw are on high alert as Russia fans march to the stadium for their group match against hosts Poland. 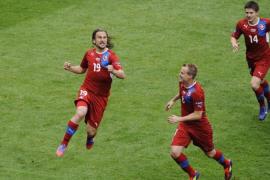 Czech Republic back in the Euro fight

Two early goals from the Czech Republic secure victory over Greece in Euro 2012 and put the nation second in Group A. 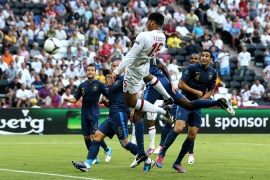 France held by England in Euro 2012

Honours even in Donetsk as Joleon Lescott’s header is cancelled out by Samir Nasri’s equaliser in Group D opener.