Turkey has announced plans to allow schools to teach the Kurdish language as an elective subject, a step aimed at reconciliation that Kurdish minority activists argue does not go far enough.

Recep Tayyip Erdogan , the Turkish prime minister, told his ruling party members in parliament on Tuesday that if “enough students come together, Kurdish can be taken as an elective lesson, it will be taught and it will be learned”.

Erdogan told parliament the measure was “a historic step”.

The government is trying to stop decades of fighting with Kurdish fighters seeking autonomy in the largely Kurdish southeast.

The teaching of Kurdish has long been banned in schools on the grounds that it could divide the country along ethnic lines.

However, it is the first time Turkish public schools will be able to offer Kurdish language courses at a time the government has faced criticism for dragging its feet on its so-called Kurdish initiative.

Activists and Kurdish politicians, however, insist on autonomy and full Kurdish education in schools.

Gulten Kisanak, deputy chairman of the pro-Kurdish Peace and Democracy Party (BDP), told a meeting of her party in parliament that allowing only elective language lessons for people whose “mother tongue is Kurdish amounts to oppression”.

Ankara announced a so-called “Kurdish opening” in 2009 in a bid to persuade fighters of the Kurdistan Workers’ Party (PKK) to end their decades-long struggle.

The initiative included investment in Turkey’s poorer southeastern region and greater recognition of Kurdish cultural and identity rights, but it faltered amid continued violence and a Turkish nationalist backlash.

Kemal Kilicdaroglu, the leader of the main opposition party, has sought national consensus to try to end the fighting that has claimed the lives of tens of thousands of people since 1984.

Erdogan on Tuesday said his party was open to dialogue with all parties, including a pro-Kurdish party, for a solution.

The first alumni of these two schools are expected to graduate in 2015. Batman University is also expected to start up a Kurdish language department in the near future. 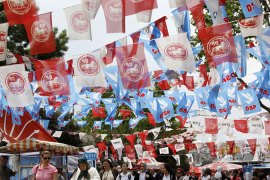 Move by the BDP could trigger by-elections and raise tensions in the country’s southeast.