As many as 100,000 Russians have marched against President Vladimir Putin’s return to the Kremlin for a third term, city police said.

The Moscow police department said on Tuesday that up to 18,000 people had set off on a demonstrations that was due to conclude with a mass rally against Putin’s rule. Organisers put the figure at about 100,000, as protests swelled well beyond the limit of 50,000 people.

The protests come one day after Russian police raided the homes of prominent critics of Putin, who was elected to another six-year term of office in March, having served as prime minister since his first two terms of office ended in 2008.

Monday’s early morning raids, carried out by police armed with assault rifles, appeared to signal a shift in tone in dealing with protests as Putin starts his new six-year term.

Despite the raids, Al Jazeera’s Rory Challands, reporting from Moscow, said the crowds representing the various political groups in the nation, remained united in their opposition to Vladimir Putin.

The speakers on stage urged the crowd “to carry on another summer of protests. In Occupy-style actions”, as Putin has already started his third term as president of Russia, our correspondent said.

One demonstrator told our correspondent that the post-election mood is different.

“Before when we were going to the rallies, we were worried because of the illegitimate elections and we requested a new vote. Now we realise this illegitimate authority is making decisions which break all the rules.”

Though the president today came out in a “conciliatory tone”, saying the demonstrations were signs of a healthy democracy, and that he wanted to engage in dialgoue with the nation’s many political groups, our correspondent said for the masses gathered in the capital today, Putin’s actions belie his words.

On Friday the president signed a law that increased fines for violations of public order at street demonstrations, ignoring warnings from his human rights council that it was unconstitutional. Opponents said the law was an attempt to silence dissent.

The new law increases fines for protests to as much as 300,000 roubles ($9,200) for participants and one million roubles ($30,600) for organisers – almost equivalent to Russia’s average annual salary.

Speaking to Al Jazeera, one man said “The laws that are being adopted now are being made by people who don’t love our country, our children, or themselves. And the point of what is going on here is to stop these people.”

Officers beat down the doors of Alexei Navalny, the increasingly popular anti-corruption blogger, as well as Ksenya Sobchak, a media celebrity and more recent Putin critic.

Others on the list included Sergei Udaltsov, an outspoken leftist who stages periodic hunger strikes to protest his repeated arrests, and the more moderate democracy campaigner Ilya Yashin.

http://www.youtube.com/watch?v=z3VX5jqQqTE “All these people whose houses have been searched have been given such publicity on the eve of another important march,” he told Al Jazeera.

“So I would say that the security forces, the police, are doing a disfavour to Putin – and Russia generally.”

Nekrassov said he did not believe that Putin himself had ordered the raids, but that someone had given the president “the wrong advice”.

The protest leaders’ representatives said the raids were unexpected and similar to those conducted in far more serious cases involving grave crimes.

Navalny’s attorney, Olga Mikhailova, told Moscow Echo radio that “around 15 policemen burst” into his Moscow apartment on Monday morning and presented him with a search warrant.

“Initially, they tried to break down the door,” she said.

Russia’s powerful Investigative Committee said 10 raids were being conducted as part of a probe over a May 6 demonstration, on the eve of Putin’s inauguration, “that ended in mass disturbances”.

“There’s a search going on at my home,” Navalny wrote on Twitter.

“They practically cut out the door,” wrote Navalny, who later tweeted that police had confiscated the electronics in his home “including discs with the children’s photos”.

Other members of the opposition said the raids were a sign that Putin had given up on democracy.

Dozens expressed anger over the move on the internet, which the opposition has used to organise the mass protests that have threatened Putin’s authority, bypassing a compliant television media that is under tight state control.

“Vova is crazy,” one Twitter user wrote, referring to Putin by using the common nickname for Vladimir, and others exchanged messages under the tag that translates as ‘ hello1937’ – a reference to the deadliest year of Soviet dictator Josef Stalin’s repression.

City authorities have authorised up to 50,000 people to take part in a demonstration and subsequent rally on Tuesday at the site of a December protest against that month’s fraud-tainted parliamentary polls.

“They are trying to disrupt the ‘March of Millions’ and make sure fewer people come,” human rights campaign Lev Ponomaryov told Interfax.

Putin won a six-year presidential term in March despite a wave of protests which drew tens of thousands of people to the streets, particularly middle-class city dwellers.

Opposition activists vowed to press ahead with plans for the protest. “These madly repressive measures are meant to frighten people,” activist Sergei Davidis said on Ekho Moskvy, adding that the protest would go ahead as planned. 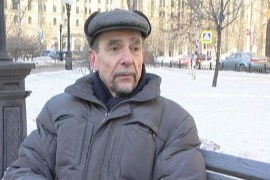 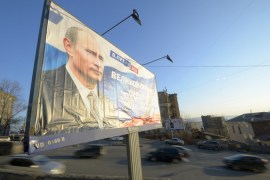 As Vladimir Putin won a third term as president, we ask if Russia can become a superpower once again. 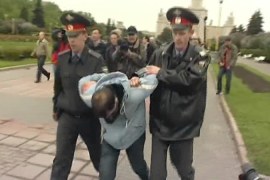 Two activists charged in St Petersburg under new law that has been denounced by rights groups.