More than 100 people have been arrested after Salafi Muslims and others clashed with police in Tunis over an art exhibition many say insults Islam.

Protesters blocked streets and set tyres alight on Monday night in the working class Ettadamen and Sidi Hussein districts of the capital, hurling petrol bombs at police in some of the worst confrontations the city has seen since last year’s revolt.

“The people arrested will be brought to justice under the anti-terror law decreed in 2003,” interior ministry official Mohamed Fadhel Saihi told reporters the day after a wave of unrest that left 65 policemen injured, led to 165 arrests, and
which the government has condemned as “terrorism”.

By morning, protests had spread to a number of residential districts, with young men preventing trams from passing through the Intilaqa district of the capital, where shops remained closed. There was evidence of looting in some areas, where shop windows were smashed.

The clashes came a day after a group of Salafis, who follow a strictly conservative interpretation of Islam, forced their way into an art exhibition in the upscale La Marsa suburb and defaced works they deemed offensive.

But Salafis denied involvement in the rampage in several areas of the capital Tunis and in the country’s northwest, and instead called a protest after this week’s Friday prayers.

The artwork that appears to have caused the most fury and polarised Tunisians spelt out the name of God using insects.

It was the latest incident in a series of confrontations between hardline Salafis and more secular state and civil institutions, including universities, which have flared over the past year in Tunisia.

“These artists are attacking Islam and this is not new. Islam is targeted,” said a youth, who gave his name as Ali and was preparing to confront police in Ettadamen.

“What has added fuel to the flames is the silence of the government, which has taken no decision,” said Ali, who did not describe himself as a Salafi.

In a statement released before the protests, Ennahda, the moderate Islamist party that now leads the government, condemned what it described as provocations and insults against religion but urged its own supporters to respond peacefully.

The violence puts Ennahda in a difficult position. While Islamists did not play a major role in the revolution, the struggle over the role of Islam in government and society has since emerged as the most divisive issue in Tunisian politics and several clashes have erupted in recent months.

Salafis want a broader role for religion in the new Tunisia, alarming secular elites who fear they will seek to impose their views and ultimately undermine the nascent democracy.

Last month, Salafis attacked bars and shops selling alcohol in at least two provincial towns, clashing with locals and
police and prompting the justice minister, a member of Ennahda, to promise that perpetrators would be punished.

The clashes come a day after the leader of al-Qaeda, Ayman al-Zawahiri, called on Tunisians to defend Islamic law from Ennahda, which won the first post-revolutionary election in North Africa in October and has said it would not seek to impose Islamic law in the new constitution that is being drawn up.

In an audio recording attributed to Zawahiri and released on the Internet, he said Ennahda had betrayed the religion.

While pushing for a greater role for Islam, Tunisian Salafi leaders have said they would do so peacefully and did not intend to clash with Ennahda.

However, Salafis say they draw the line at actions they believe humiliate Muslims or undermine their religion. Secularists say Salafis are unwilling to tolerate alternative points of view and seek to stifle freedom of expression.

They say Ennahda has been too lenient with Salafis, giving them the confidence to step up their demands. 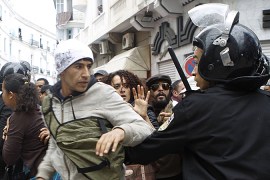 Police use force to break up Tunisia protest 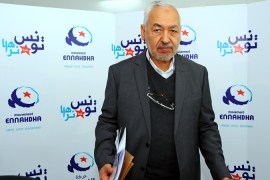 The rise of so-called Islamist parties in the wake of the Arab Spring is a product of democracy, not an obstacle. 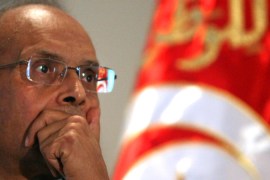 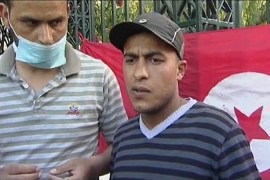 Protesters stage demonstration outside parliament, claiming lack of treatment and that their plight is being ignored.