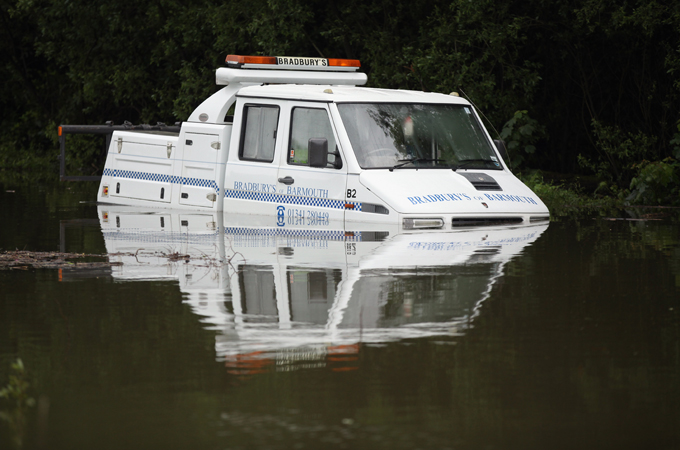 A Abreakdown truck stranded in floodwaters in Aberystwyth, Mid Wales during the rescue operation. [Getty Images]

Residents and holiday makers were taken by surprise on Saturday morning as floods hit west Wales in the United Kingdom. Lifeboats, fire crews and military helicopters had to be drafted in to rescue about 150 stranded people.

A spokesman for Mid and West Wales Fire and Rescue Service said emergency services were called at around 0300 GMT to deal with “a large amount of water and a heavy current” which was running through Riverside Caravan Park in Llandre, near Aberystwyth.

More than 80mm of rain fell in 24 hours on Saturday in Trawscoed, Ceredigeon. Some areas saw almost twice that total. Indeed, Royal Air Force (RAF) helicopters were called in to help in the operation in and around Aberystwyth after 127mm of rain in the same period of time.

This region usually sees around 70mm of rain during the entire month of June. Conditions were so bad that at one stage, even one of the Royal National Lifeboat Institution (RNLI) boats had to be saved by the RAF after becoming stranded during a rescue attempt.

The worst of the rainfall is now over, with just a few showers expected across the area during the next few days. River levels remain high, but conditions are expected to steadily improve as we go through the week ahead.