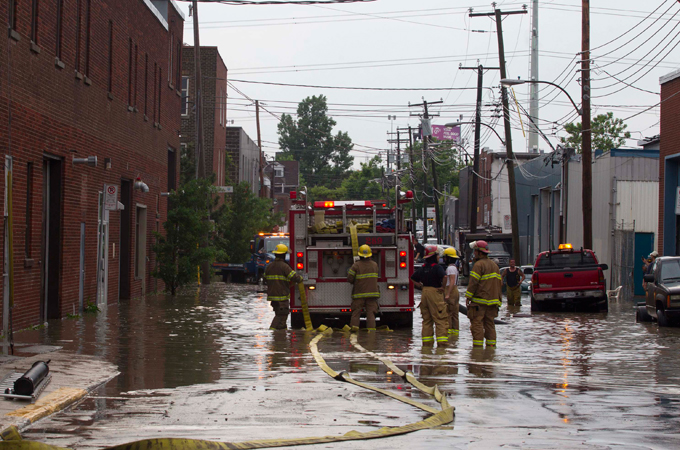 On 30 May 2012, many schools and offices in Montreal were closed after flash flooding hit the city on Tuesday.

A line of severe thunderstorms rumbled across the region in the late afternoon of 29 May, delivering 30mm of rain in just quarter of an hour.

30mm of rain might not sound like a lot of, but when that falls in just fifteen minutes, it can cause havoc in almost any city.

In Montreal, the storm left 28,000 homes without power.

The downpour overwhelmed the sewer system, causing water to stream down the streets and into buildings. Homes, schools and shopping malls were inundated, and basements were submerged.

Residents reported hideous scenes of water gushing up from toilets and shower drains. Even people with specially installed back-up systems weren’t safe, as many failed.

“No sewer collector network would have been able to manage the quantity of water that we saw.”

The metro’s orange line was shut down as water poured into stations, the lower level of the Grande Bibliothèque was flooded, and at Montreal’s Museum of Contemporary Art hundreds of rare works of art were damaged.

The water streamed downhill, collecting in puddles up to 300mm deep. In some low-lying neighbourhoods the water even rose high enough for people to swim in the street.

Spring floods are fairly common in Canada, but are usually triggered by overflowing rivers which have been swollen by melting snow.