Hashemi, who is being tried in absentia in Baghdad after being accused of running a death squad, insisted in a statement on Tuesday that he was not above the law and was ready to appear in court if his security, and a fair trial, could be guaranteed.

“The Red Notice for al-Hashemi represents a regional and international alert to all of Interpol’s 190 member countries to seek their help in locating and arresting him,” Interpol said.

It said the notice, its highest possible alert, was issued following an Iraqi warrant made “as part of an investigation in which security forces seized bombing materials and arrested individuals”.

Hashemi – last known to be in Istanbul after receiving medical treatment for respiratory complications in the Turkish capital, Ankara – along with his bodyguards faces about 150 charges, including the alleged killing of six judges and other senior officials, according to an Iraqi judicial spokesman.

Hashemi has challenged the legitimacy of the trial and said his life is at risk in Baghdad.

Hashemi said in a statement posted on his website early on Tuesday that he was awaiting a “political solution” to the stand-off.

“I respect the [Iraqi] judiciary and I am not above the law,” he said.

“If a fair trial is possible, not politicised, and there are security guarantees and guarantees of my constitutional rights, I will stand before any court, even if it is in Baghdad because I am sure of my innocence.”

Al Jazeera’s Jane Arraf, reporting from Amman in neighbouring Jordan, said that although Hashemi maintains his own innocence, it may be possible that members of his entourage were involved in attacks during the civil war.

“It could be possible that some of his guards were implicated but he didn’t know about it,” she said.

Hashemi said he was planning to return to Erbil, the capital of Iraqi Kurdistan, on Tuesday but decided to delay his trip after appeals by unnamed political leaders.

Ronald Noble, Interpol secretary-general, said in a statement that the Red Notice would “significantly restrict” Hashemi’s ability to travel and cross international borders.

“This case also clearly demonstrates the commitment of Iraqi authorities to work with the world police community via Interpol to apprehend individuals facing serious charges,” he said.

A Red Notice is not an internationally binding arrest warrant but many of Interpol’s members consider it a valid request, especially if they have an extradition treaty with the requesting country.

Selcuk Unal, a Turkish government spokesperson, told Al Jazeera that the Red Notice was “just disseminating information about a person” and that Hashemi, still considered Iraq’s current vice-president, would return to Iraq after receiving medical treatment in Istanbul.

Unal, speaking from Ankara, said Turkey “will look into the matter” but has not yet made any decisions regarding extradition.

In a statement issued by his temporary media office, Hashemi, one of Iraq’s highest-ranking Sunni politicians, accused the Iraqi judiciary of losing integrity and impartiality.

He said he expected Interpol do a more thorough job of vetting what he calls “fabcricated” charges against him, rather than “rush” to issuing the Red Notice.

Iraqi authorities issued an arrest warrant for Hashemi in December after the US completed its pullout and he first sought refuge with Iraqi Kurds who refused to hand him over. He then fled to Turkey, after stops in Qatar and Saudi Arabia.

“My life in Baghdad [is] in high risk,” he said on Friday in Istanbul, where he has been based for more than a month.

Hashemi has challenged the legitimacy of the trial in the Central Criminal Court of Iraq, claiming the federal court should have handled the case because he is a sitting vice president.

His trial began on Thursday, but was adjourned until May 10.

Ghassan al-Attiya, a Baghdad-based analyst, believes the accusations lodged against Hashemi are indeed political in nature.

Speaking to Al Jazeera on Tuesday, Attiya said in the period between February 2006 and May 2008, all of the local “militias were attacking each other. I would not presume any of them to be innocent”.

“Why  didn’t they raise the issue before?” he said. “Probably there is a political motive” to the charges.

On the other hand, Saad al-Mutalabi, a senior adviser to Maliki, said accusations that the prime minister was exacerbating ethnic and sectarian divisions in the country was “just political talk”.

Speaking to Al Jazeera over phone from Baghdad, he said politicians, not lawyers, were making the complaints against Maliki.

Denying that Maliki was stoking sectarian rifts, Mutalabi pointed to Maliki’s trip to the province of Kirkuk, where he was holding a cabinet meeting in support of Arab Sunnis in the northern province. 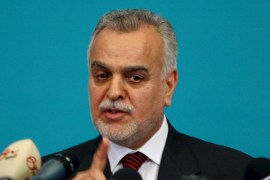 The legal travails of Tariq al-Hashemi

Interpol issues “red notice” for Iraq’s Sunni vice-president, who is wanted by the Shia-led government. 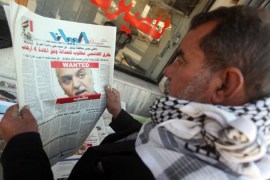 Will the issuing of an arrest warrant for Iraq’s vice president cause sectarian tensions to flare? 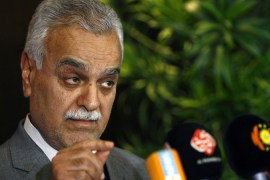 Tariq al-Hashimi says he will only stand trial in Kurdish region as prime minister calls for his return to Baghdad. 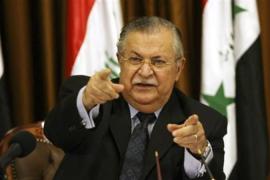