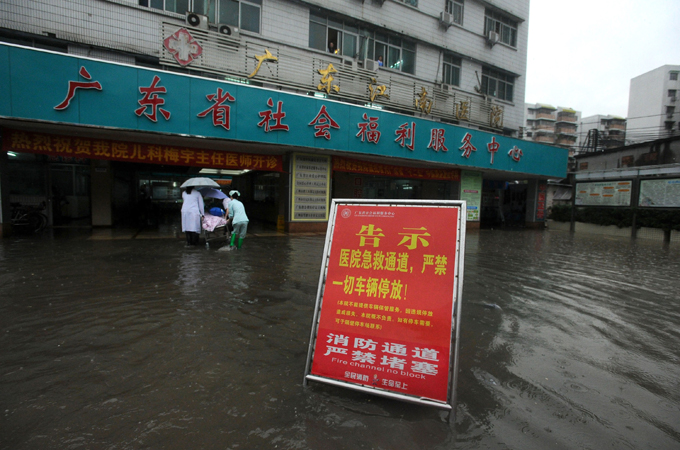 Flooding is almost an annual occurance in some parts of China, but this year the rains started earlier than usual. [Getty Images]

It has been an early start to the wet season, otherwise known as the flooding season, in southern China. The latest place to suffer is Guangdong province where a massive rainstorm caused widespread flooding on Sunday.

More than 160mm of rain was recorded during the afternoon in Guangzhou as the storm moved through accompanied by some very strong and damaging winds. Within 10 minutes, roads under the Tianhe flyover were submerged in water causing dozens of people to seek shelter.

The neighbouring city of Foshan was worst affected and here the public transit bus service was forced to stop running for an hour. There was also a 200m long landslip at one local beauty spot. Fortunately, no one was hurt.

Northwest China’s Ningxi Hui Autonomous Region was also hit with flash flooding on Monday. Torrential rain along the Ningxia Mountains caused the flooding which also closed some highways and left hundreds of motorists stranded for a time.

Bulldozers had to be brought in to clear mud that rapidly accumulated on the roads. The rainfall was not actually that heavy at lower levels with rates of around 15mm per hour being recorded, but the downpours were substantially heavier over the higher ground and that was enough to destabalise the mountains.

This is in stark contrast to the a sustained drought which is gripping the southwest. Water shortages are affecting more than 680,000 people, with the Guangxi Zhuang Autonomous Region and neighbouring Guizhou Province worst hit.

The temperature has been around 2-3 degrees above normal and more crucially, the region has seen 30-50% less rainfall than usual. The local government has mobilized more than 100,000 people and over 500 vehicles in order to provide much needed drinking water to the area.