Syrian security forces have kept heavy weapons in cities in breach of a UN-brokered cessation of hostilities, but the
government and opposition both have committed truce violations, a top UN official has said.

Ladsous insisted, however, that the monitors were having an effect in cities where they have been allowed to go.

Withdrawing weapons and troops from Syrian cities was a key part of a six-point peace plan agreed by President Bashar al-Assad and UN-Arab League envoy Kofi Annan. Syria has told the UN that weapons have been pulled back.

Syria has told the monitors that the armoured carriers have been disarmed but this has not been verified, Ladsous added.

Ladsous, a UN under-secretary, said that government forces and opposition groups have broken the truce.

“All the parties need to take further steps to ensure a cessation of violence in all its forms,” he said.

“The important fact is that violations do come from both sides,” he said while refusing to say whether one side had committed more breaches.

A separate UN official said on Tuesday that more than 34 children have allegedly been killed in Syria since the truce officially took hold last month.

“Since a truce was agreed on April 12 … and despite the deployment of United Nations ceasefire monitors, more than 34 children have allegedly been killed,” Radhika Coomaraswamy, the special envoy for children and armed conflict, said in a statement.

“I urge all parties in Syria to refrain from indiscriminate tactics resulting in the killing and wounding of children,”

The UN also said on Tuesday it was accelerating the deployment of 300 unarmed ceasefire observers to Syria to ensure all are on the ground by the end of May to monitor both sides’ compliance with Annan’s six-point peace plan.

“We have 24 observers on the ground and I fully expect this number to increase rapidly over the next two weeks so that UNSMIS [UN Supervision Mission in Syria] will build up to full operational strength by the end of May,” Ladsous said.

Meanwhile, the UK-based Syrian Observatory for Human Rights (SOHR) said two children were among 10 people killed in a mortar attack by government forces in the northern province of Idlib.

Nine members of a single family were allegedly killed in a dawn bombardment on a village near the town of Jisr al-Shughur on Tuesday.

Syrian state media blamed the attacks on “armed terrorists”, a term it usually uses to describe those trying to overthrow President Bashar al-Assad.

In the eastern Deir al-Zor province on Tuesday, 12 soldiers were reportedly killed in clashes with opposition fighters. The SOHR said troops hit back with mortar and heavy machinegun fire, killing at least one villager and destroying a school. 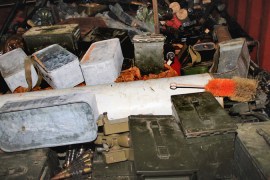 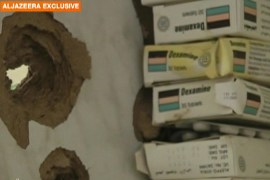 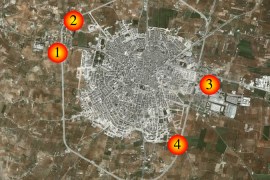 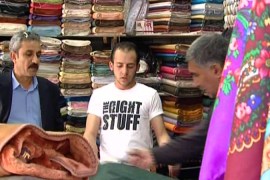 Trade drops by half as transport problems pile up and Syrian pound depreciates.