A fire has swept through a drug rehabilitation centre for addicts in Chosica, near the Peruvian capital Lima, and officials say at least 14 people are dead.

Officials are not sure what set off Saturday’s pre-dawn blaze at the Sacred Heart of Jesus Clinic, a two-storey building in the Chosica district, about 32km east of Lima.

There was only one survivor. The cause of the fire has not yet been confirmed.

According to Peruvian media reports, the blaze began at around 04:00 local time (09:00 GMT) after a patient set fire to a mattress on the second floor. It reportedly took two hours for firefighters to bring the blaze under control.

Fire chief Fernando Campos said 14 bodies had been counted – 13 on the second floor of the building and one on the first floor.

They were unable to escape the inferno because windows were barred and doors were locked, firefighters said.

Campos said firefighters had to use tools to break into the building, as the the main door was padlocked.

“The doors were locked and the windows on the second floor had bars on them. It wasn’t possible for people to get out,” he told the AFP news agency.

The disaster comes just three months after 29 people were killed in a fire at another drug rehabilitation centre in Lima.

Neighbours, however, reported hearing the sounds of fighting among the residents before the fire broke out early on Saturday.

“We almost always heard screams at night but then they calm down,” a woman told the local media.

“But this time, it seemed like they were fighting and the screaming was very loud, until a guard came out of the house and asked for the fire department to be called because there was a fire.”

The sole survivor of the blaze, Luis Zeballo, told reporters he smelled smoke and felt heat in the early morning and ran out of the building.

“I heard them calling for help when I was already downstairs,” he said.

Residents of the rehabilitation centre lived in a dormitory on the second floor of the house, while the first floor was used for offices and consulting rooms.

Investigators said the fire may have broken out on the ground floor, blocking the path of those on the second floor.

Chosica Mayor Luis Bueno told reporters that inspectors had been to the centre several months earlier, and had noted nothing unusual.

But he said it was up to the federal government to better regulate the country’s many private, often unlicensed drug rehabilitation centres.

Drug abuse and prevention group CEDRO says there are about 260 such centres around the country, but only 20 per cent are licensed and have personnel trained to deal with alcoholics and drug addicts.

According to CEDRO, state-run facilities have only 700 beds for an estimated 60,000 to 100,000 people dependent on drugs in Peru, which is one of the world’s leading cocaine producers. 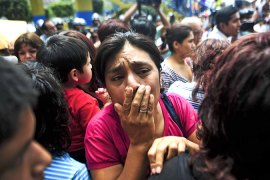 At least 26 killed in private drug and alcohol rehabilitation centre where some patients were locked in rooms. 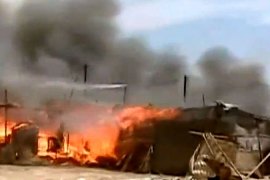 Almost 800 people are homeless after a fire swept through a settlement area in city of Chimbote.