An earthquake has killed at least 17 people and injured about 200 others in northern Italy, damaging buildings and spreading panic among thousands of residents still living in tents after a tremor in the same region destroyed their homes just over a week ago.

Tuesday’s 5.8-magnitude quake had rescue workers scrambling to respond to reports of people trapped under the rubble of houses and warehouses in the Emilia-Romagna region, where several building sites and workshops had just reopened after the previous quake on May 20.

Seven people were killed in the May 20 quake that, like Tuesday’s, had its epicentre not far from the city of Modena.

Al Jazeera’s Sabina Castelfranco reported from Cavezzo that the centre of the town had been evacuated and cordoned off.

“There is rubble everywhere, homes have collapsed, and the situation is very difficult,” she said. “Tent cities have been set up in various towns so that they can be given shelter overnight.”

Residents stood in shock looking at the damage.

“I’ve been in many dangerous situation, but I’ve never been in such a situation as this, it is something undescribable,” Giorgio said. “We are very afraid, because one feels you are in front of something out of your experience.”

“There is the sensation that you are going to lose everything, your life, your house, because we won’t be able to go home to our houses. We’ll have to start again,” added Patrizia who had lost her home.

Workshops and factories outside Cavezzo, a village about 30km from Modena, suffered considerable damage, a Reuters reporter said.

The quake was felt across northern and central Italy, including in the city of Milan.

The area was hit by several large aftershocks, one of 5.6-magnitude. The quake was the deadliest to strike Italy since 2009 when a tremor partially destroyed the central city of L’Aquila, killing about 300 and leaving thousands homeless. 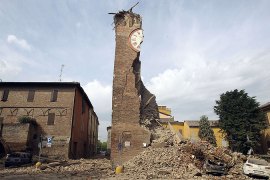 At least seven people killed and many historical buildings damaged in 6.0-magnitude quake near city of Bologna.