By Evan Hill and Matthew Cassel

Voting in Egypt’s first democratic presidential election has ended for the first of two days, with election observers and media sources reporting calm lines and few violations in polling stations across the country.

Closing time was extended for an extra hour as people flocked to the polls in the first presidential election since Hosni Mubarak stepped down.

Thirteen candidates are running to succeed Mubarak, whose government was brought down by mass protests in 2011 after 30 years of authoritarian rule.

They range from socialists to secular liberals to conservative Islamists, and opinion polls indicate the race remains a toss-up.

In Cairo, polling stations opened around 8am local time and lines could be seen snaking down sidewalks in the city centre.

Elsewhere in the capital, observers reported less interest and only a moderate amount of voters, which some explained as a result of the two days available for voting or the fact that workers had not left their offices yet.

Al Jazeera’s Mike Hanna said there was a high turnout at polling stations in Cairo, where many people said they had come to vote early to avoid the blistering heat expected later in the day.

The election is the final phase of a tumultuous transition marred by violence, protests and political deadlock, overseen by the ruling Supreme Council of the Armed Forces (SCAF) after last year’s revolution.

South of Cairo’s city centre, in working-class neighbourhoods such as Ain Sira and Abu Seoud, monitors from the campaigns of Mohammed Morsi, the Muslim Brotherhood candidate, and Abdel Moneim Aboul Fotouh, a former Brotherhood activist, were also observing the vote.

Campaigning outside polling places, which is illegal but was common during parliamentary elections last autumn and winter, seemed to have disappeared.

Outside a primary school polling place in Ain Sira, 29-year-old Ahmed Ali, who works as a driver for a petrol company, said he had voted for Morsi.

“I don’t know him personally, but I know him through the Brotherhood,” he said. “They are very organised people, and his background is moderate.”

Yasser Shehata Mohammed, a 48-year-old electrical engineer who organised Morsi’s campaign in the neighbourhood, said he expected the candidate to receive fewer votes than their parliamentarians did last year.

“There are strong competitors and the media coverage played a big role,” he said.

Mohammed studied under Aboul Fotouh when he led the Brotherhood’s efforts in the area, and he respects him, but Mohammed said Morsi has an organisation behind him, while Aboul Fotouh has personal appeal.

In the northern coastal city of Alexandria, lines of voters began forming under the warm Mediterranean sun more than an hour before polls opened in some places.

Jamal Elshayyal, reporting from a voting station in the Mediterranean city where a few hundred women had lined up, said there was a “huge euphoria as people are finally getting to choose who will rule the country.”

“I’m so excited,” said Mounira Fawzi, 21 as she waited outside the Mohamed Korriam School in the upscale Smouha area.

“This is the first time I get to vote for president since the revolution. Hopefully we will get someone who can fix the country. God willing after the elections democracy will come to Egypt.”

Minutes later Fawzi emerged from the polling station, the pinky finger on her right hand dyed in purple ink.

“I feel freedom,” she said, her body shaking with excitement. “For the first time my voice and opinion really counts.”

The mood was present across town in Moharram Bek. People lined the narrow streets as Alexandria’s unique yellow and black taxis flooded the streets.

By midday there were few complaints from voters in Alexandria.

Across town, representatives of the different could be found in most polling stations to make monitor the vote and report any irregularities.

“Everything is going fine,” said Hamdy Abdel Salman, a representative for Morsi’s campaign at a voting station in Moharram Bek.

“At first people were complaining about the long lines, but the organization is getting better as the day goes on.”

Another issue which many voters will consider when choosing their candidate is security, Al Jazeera’s Rawya Rageh said from the Red Sea port city of Suez.

“In the past 15 months after the revolution, security has been a top concern for Egyptians,” she said.

“There has been lawlessness, all sorts of reports of kidnappings, car jackings, home invasions – the kind of violence this country was never used to.”

The SCAF has called on Egyptians to turn out en masse to the polls, while warning against any “violation”.

“The participation of citizens in the presidential election is the best guarantee of the transparency and security of the electoral process,” Mohammed al-Assar, a SCAF member, was quoted as saying by state news agency MENA.

The election comes less than two weeks before a court is expected to issue a verdict in the trial of Mubarak, 84, tried on charges of complicity in the killing of about 900 protesters during the uprising against his 29-year rule.

He also faces corruption charges, along with his two sons, Gamal and Alaa. 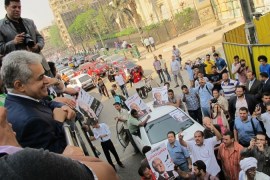 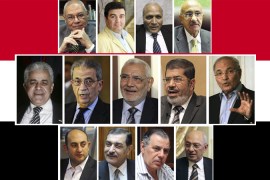 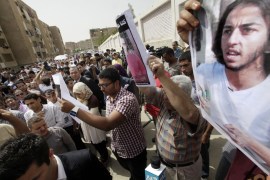 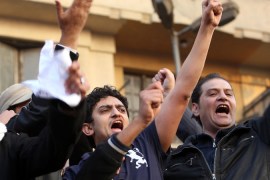