Israelis and Palestinians are negotiating through Egyptian intermediaries to end a mass hunger strike by at least 2,000 Palestinians in Israeli prisons, officials say.

Palestinian officials on Saturday said Egyptian officials were trying to mediate between the strikers and Israel.

“There was progress in talks between Egypt and Israel,” Ismail Haniya, Hamas’ Gaza prime minister, said in a statement on Saturday. “This is an important development concerning the demands of the prisoners.”

Al Jazeera’s Cal Perry, reporting from Jerusalem, said the issue of releasing Palestinian prisoners has become a key demand of the Palestinian leadership.

“People in the occupied territory seem to put more and more pressure on the Palestinian leadership to address this issue. We now have more than 2,000 Palestinian prisoners on hunger strike. Two of them have been on hunger strike for more than 76 days. Their lawyer is saying that they could die any day now.”

An Israeli official confirmed talks were taking place but would not offer more detail, while Egyptian officials were not immediately available for comment.

Egypt helped broker a prisoner exchange deal that saw hundreds of Palestinian prisoners released by Israel last year in return for a captured Israeli soldier. Haniya had asked for its intervention in the current hunger strike.

This is the first time that substantive talks have been reported to be under way to defuse the hunger strike carried out by the prisoners to demand better conditions and an end to detention without trial.

Most have refused food for a month and a smaller core have gone without it for longer.

Palestinian officials said they expected a breakthrough soon on efforts to end the hunger strike, the AFP reported.

Amin Shoman, head of a monitoring group of Palestinian political factions, told AFP that if Israel gave a negative response, prisoners would intensify their fast and break off further talks with prison authorities.

“The prisoners will stop taking vitamins and water and stop negotiations with the Israel Prisons Service if they get a negative answer,” he told AFP.

Shoman, and an official of the Palestinian Prisoners’ Club, which tracks the well-being of Palestinians in Israeli jails, said they expected Israel to announce “within hours” its decision on demands by the hunger strikers.

He said Israel’s prisons service was expected to facilitate visits to prisoners by relatives from Gaza, who are not normally allowed to leave the coastal strip and travel through Israeli-held territory, to resume prisoner studies and to make concessions on solitary confinement.

Sivan Weizman, a spokeswoman for Israel’s prisons service, said on Saturday that 1,550 Palestinian prisoners were currently refusing food in protest against solitary confinement, detention without charge and restrictions on family visits, education and various privileges.

Activists have said that as many as 2,500 of the 4,600 Palestinians held in Israeli prisons are currently on hunger strike.

The World Health Organisation on Friday urged Israel to give quick and suitable health care to Palestinian hunger strikers, including their transfer to civilian hospitals.

The UN agency said it was “extremely concerned” about their health.

“WHO calls on the Israeli authorities to ensure immediate and adequate access to appropriate ongoing health care for the hunger-strikers,” it said in a statement.

“WHO also requests Israel to ensure that … release to hospital be facilitated for prisoners requiring medical treatment.”

The hunger strikes have widespread support among Palestinians who have staged regular demonstrations in solidarity with the prisoners.

Thousands of Palestinians took part in solidarlity rallies in the Gaza Strip and across the occupied West Bank and East Jerusalem. 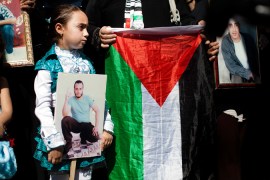 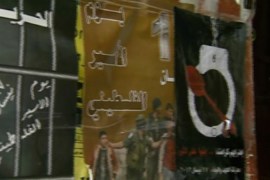 At least six out of 2,000 hunger-striking prisoners in Israeli jails at imminent risk of dying, lawyers say. 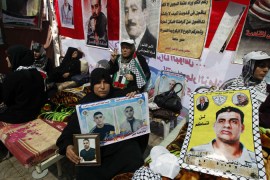 Israel Supreme Court rejects plea by two Palestinian prisoners on hunger strike in protest at being held without charge.