A UN-brokered plan to stop the bloodshed in Syria is in jeopardy after Bashar al-Assad’s government raised new, last-minute demands that were rejected by the country’s armed opposition amid a fresh surge in violence.

Under a peace deal brokered by Kofi Annan, the UN-Arab League special envoy, the Syrian army was scheduled to withdraw from protest cities on Tuesday, with a complete end to fighting set for 48 hours later.

But Syria has since said it would only carry out its side of the bargain if the rebels first handed over written guarantees to stop fighting, a demand rejected by the leader of the largest armed opposition group, the Free Syria Army (FSA).

Colonel Riad al-Asaad said the FSA is committed to the peace plan but will give guarantees only to the international community and not the Syrian government.

“It is not a regime that is ruling the country. It’s a criminal gang. So we will not give guarantees to it,” Asaad told Al Jazeera just hours after the government issued its demand on Sunday.

Asaad said that if the Syrian government abided by Annan’s six-point plan to end the violence, the FSA would hold its fire. He demanded that the government withdraw its forces to bases and remove checkpoints from the streets.

Last week, Assad accepted the ceasefire agreement calling for government forces to withdraw from towns and villages by Tuesday, and for the government and opposition fighters to lay down their arms by 6am local time on Thursday.

But in a statement released on Sunday and reported by the Associated Press news agency, Jihad Makdissi, Syria’s foreign ministry spokesperson, said earlier reports that the government would pull its troops from cities and their suburbs by Tuesday were “wrong”.

Makdissi said that Annan had failed so far to submit to the Syrian government “written guarantees regarding the acceptance of armed terrorist groups to halt violence with all its forms and their readiness to lay down weapons”.

For his part, Annan urged Syria’s government to fully implement its commitment to the ceasefire, and he condemned “a surge in violence and atrocities” that is occurring there.

He said in a statement on Sunday that the fighting is causing “alarming levels of casualties, refugees and displaced persons” and that it must stop.

A UN presidential statement raised the possibility on Thursday of “further steps” if Syria did not implement the peace plan outlined by Annan, which Assad agreed to on March 25.

The statement called on all parties, including the opposition, to stop armed violence in all forms in 48 hours after the Syrian government fully fulfills the measures.

The truce is meant to pave the way for negotiations between the government and the opposition over Syria’s political future.

However, activists say Syrian troops are continuing their assault on flashpoint regions.

Forces loyal to President Assad shelled an area in the province of Idlib near the border with Turkey leaving dozens dead or injured, opposition activists said on Sunday.

Around 90 tanks and armoured vehicles, backed by helicopters, bombarded the al-Rouge Plain, southwest of Idlib city, the provincial capital, Reuters news agency reported quoting activists inside Syria and on the border with Turkey.

The activists further said fighters from the FSA were surrounded in al-Bashiriya, one of about 40 villages in the plain.

The Syrian National Council, as the main opposition umbrella group is known, called on Sunday for UN intervention after monitoring groups said 86 of those killed on Saturday were civilians.

Towns north of Aleppo have endured days of clashes and bombardment, prompting 3,000 civilians to flee over the Turkish border on Friday alone, about 10 times the daily number before Assad accepted Annan’s plan 10 days ago.

“At the moment, we have 24,000 Syrians who have entered Turkey. Of course, this number is rising,” Erdogan said before departing on a trip to China.

“We are taking measures for this, though we will not close the gates. The United Nations, however, has to toughen its stance,” he said.

“In particular, Kofi Annan has to hold firm. He announced a deadline of April 10. I believe that he should monitor the situation very closely.”

The UN estimates that at least 9,000 people have been killed in Syria since the crisis began 13 months ago. 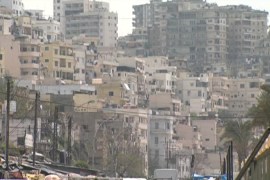 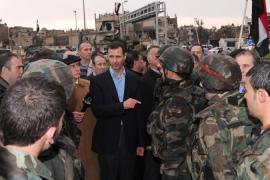 The information war over Syria

With international media not allowed into the country, both government and opposition are resorting to propaganda. 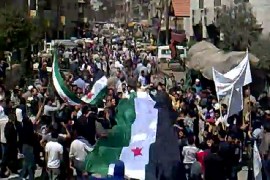 Ankara says more than 2,500 people have fled fighting in Syria’s north in past 24 hours, as UN ceasefire deadline looms.