North Korea’s long-range rocket, scheduled to put what it says is a satellite into orbit next week, has been installed on its launch platform, the country’s space officials say.

Engineers said on Sunday that the satellite will orbit the earth and send back data for weather forecasts and crop surveys.

Officials said they have moved all three stages of the rocket into position, pledging to push ahead with their plan in defiance of international warnings.

South Korea said its army is preparing for any threats.

“We want to clarify that the launch is a provocation that threatens the peace and stability of the Korean peninsula and Northeast Asia,” Kim Min-seok, South Korean defence ministry spokesman, said.

“The South Korean military is fully prepared to protect the South Korean people and respond firmly against any acts of provocation that threaten the peace and stability of the Korean peninsula.”

The US, Japan, Britain and other nations have urged the isolated nation to cancel the launch, warning that firing the long-range rocket would violate UN resolutions and North Korea’s promise to refrain from engaging in nuclear and missile activity.

North Korea maintains that the launch is meant to demonstrate its scientific achievement.

The communist nation organised an unprecedented visit to Tongchang-ri space centre to show that the Unha-3 rocket is not a disguised ballistic missile, as claimed by the US and its allies, notably South Korea and Japan.

“To say this is a missile test is really nonsense,” Jang Myong-jin, head of the space centre, said.

“This launch was planned long ago, on the occasion of the 100th birthday of [late] president Kim Il-sung. We are not doing it for provocative purposes.”

For the first time, North Korea allowed some 50 foreign journalists to go to the new space centre built on the Cholsan peninsula, 50km from the Chinese border.

The journalists were able to observe the rocket, painted in white with sky blue lettering, installed on a platform ahead of its scheduled launch sometime between April 12-16.

Jim Walsh, an international security expert at Massachusetts Institute of Technology, says the launch is aimed at cementing the position of the country’s new leader, Kim Jong-un.

“I think this test is aimed not an international audience- South Korea, US or others. It is aimed internally,” he told Al Jazeera from Boston.

Kim took over as the country’s “supreme leader” after his father, Kim Jong-il, died last december.

“Roughly, this is their fourth test in 15 years. That doesn’t take you far in the missile business.”

It even deployed a land-based system of interceptor missiles in preparation for the planned rocket launch.

The US suspended on March 29 ood aid to the North, saying Pyongyang had broken its promise to refrain from missile launches and cannot be trusted to deliver the aid to those who need it. 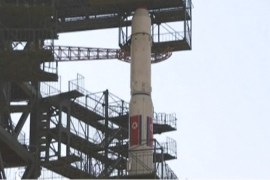 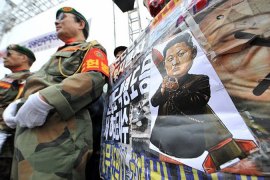 Defence minister says Japan could shoot down rocket if it enters its airspace, as China voices concern over launch plan. 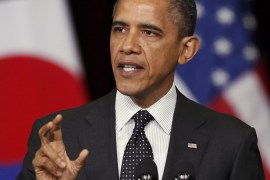 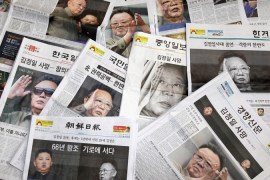