Bahrain has rejected a request to transfer to Denmark a jailed Shia activist who has been on hunger strike for two months and also holds Danish nationality, the state-run Bahrain News Agency has reported.

“The handover of accused and convicted persons to foreign countries takes place under specific conditions … This does not apply in Abdulhadi al-Khawaja’s case,” a Supreme Judiciary Council official said, quoted by BNA on Sunday.

The statement did not gave any further details.

Khawaja, who was condemned with other opposition activists to life in jail over an alleged plot to topple the Sunni monarchy during a month-long protest a year ago, began his hunger strike on the night of February 8.

BNA reported on Saturday that Bahrain was examining a request to transfer him to Denmark.

The request was referred to the head of the Supreme Judicial Council.

Speaking to Al Jazeera on Monday, Fahad al-Binali, from Bahrain’s Information Affairs Authority, said that it “must be remembered that the convictions against Abdul Hadi al-Khawaja are serious charges”.

“Any person who demands reform must understand that the rule of law comes first,” he said.

Binali said that although Khawaja stands for appeal on April 23 and “he the right to express his opinion”, he has been given “access to medical care an independent medical team”.

“I disagree with the claims of the arrest and detentions and not allowing people to express opinions on democracy, ” said Binali.

But on Sunday, al-Khawaja’s daughter, Zainab, told Al Jazeera that while her father began the hunger strike saying it was “freedom or death”, his goal now was for the world to see what was happening to Bahrainis.

“To the hundreds of political prisoners … Right now there are prisoners as young as 12-years-old,” she said.

Front Line Defenders, a Dublin-based non-governmental organisation, warned on Tuesday after a visit to Manama that Khawaja, who had shed 25 per cent of his body weight, could die in jail and was “at risk of organ failure”.

Bahraini authorities said he had lost some 10kg and was showing signs of low hemoglobin, “although not at a critical level, since prior to going on the strike”.

Khawaja was “taking fluids, mineral supplements, glucose and juice on a daily basis”.

On Wednesday, the Information Affairs Authority said Khawaja had been moved to a clinic after losing 10kg.

Jishi said the drip is only a saline-glucose solution.

“The doctors said this won’t be enough to keep him alive. He is in a critical phase and he still needs to take food,” he said.

Bahrain’s largest opposition movement Al-Wefaq urged the international community to intervene and press for his release, in a statement on Friday as hundreds of people demonstrated in the kingdom demanding his release.

Tensions have been running high in Bahrain where an independent inquiry said in November that 35 people were killed in Shia-led protests between mid-February and mid-March 2011.

Former world champion Damon Hill has demanded a rethink over the contentious Bahrain Grand Prix which is due to take place later this month despite ongoing anti-government protests in the troubled Gulf state.

Last year’s event was cancelled because of the turmoil. 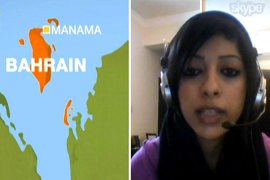 Zainab al-Khawaja says her father sounds weak but believes death is better than “living in humiliation”. 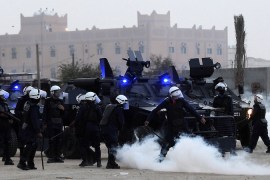 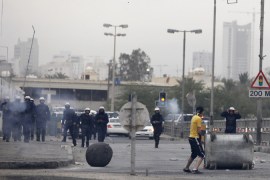 Police fire tear gas and arrest several protesters calling for cancellation of event scheduled for this month in Manama.