Mali’s president, who was ousted from power in a military coup last month, has officially resigned, paving the way for a deal that would also see the two-week-old military junta stepping down in return for the end of trade and diplomatic sanctions.

“I think that my duty today, as it was 22 years ago, is to help Mali,” President Amadou Toumani Toure said on Sunday from one of the hiding places in the capital where he had been holed up since last month’s coup.

“I therefore believe that it is very normal, and I do it without pressure and in good faith. In particular, out of love for my country, I have decided to hand in my letter of resignation, which I will hand in to the relevant authorities to allow the smooth transition.”

Toure penned his resignation letter and in the presence of reporters handed it to an emissary to deliver to the country’s new leaders.

Djibril Bassole, Burkina Faso’s foreign minister, and a leading ECOWAS mediator, confirmed the resignation, saying: “We will now contact the competent authorities so that the vacancy of the presidency would be established and so that they take the appropriate measures.”

Al Jazeera’s Hashem Ahelbarra, reporting from the capital Bamako, said the resignation should pave the way for the formation of an interim government.

“Diouncounda Traore, who is the president of the National Assembly, is going to be appointed tomorrow as per the constitution as the interim president of Mali,” Ahelbarra said.

“Then [Traore] will start talks with the military junta and at the same time with the main political parties here in the capital Bamako to form a national unity government.

“As soon as they overcome some of the obstacles, they will start looking after the major issues particularly half of the country which is under the control of the Tuaregs.”

Ahelbarra also said that members of the military junta would probably get positions in key political ministries in the interim government, most likely in the ministry of defence.

The junta, led by army Captain Amadou Sanogo, together with neighbouring bloc the Economic Community of West African States (ECOWAS) announced the deal on the transition of power late on Friday.

Under the plan, signed by mediators and Sanogo, the military government would hand over power to Traore who would be sworn in as interim president with a mission to organise elections.

Sanogo, at the time, said the new prime minister and a national unity government will be put in place “in the next few days”.

The deal, hailed by the African Union, also includes the lifting of sanctions clamped by ECOWAS on Mali and an amnesty for those involved in the coup.

The embargo included the closing of all borders of ECOWAS states with Mali except for humanitarian reasons, closing to Mali access to ECOWAS ports, and the freezing of Malian bank accounts.

He also said Toure, who was overthrown on March 22 and had not been seen in public until his resignation on Sunday, should be able to live where he wants under army protection.

The five-page agreement provides a framework for a return to constitutional rule under the interim leader who will also handle the crisis in the north, where Islamists and Tuareg rebels have seized control.

The deal did not give a timetable for Sanogo to step down, but said the 15-state ECOWAS bloc would immediately prepare the end of tough sanctions including the closure of trade borders to the land-locked country.

The statement added that if elections were not possible within the 40 days set out by the constitution due to Tuaregs’ rebellion in the north, a transition structure would need to be created.

The announcement came as the northern rebels declared independence of the territory they call Azawad, a call immediately rejected by African neighbours and foreign capitals from Paris to Washington.

Interview in Mali with ECOWAS delegation 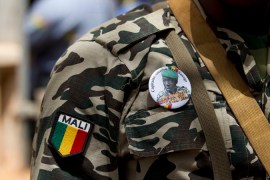 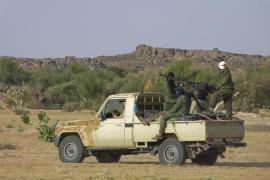