Egypt’s most powerful political group, the Muslim Brotherhood, has announced it is nominating the head of its party as a back-up candidate for president in the face of attempts to disqualify their primary nominee.

Other politicians also battled on Saturday to keep their candidacies from being disqualified on technical grounds.

The moves have shaken up Egyptian politics and raised passions one day before the deadline on Sunday for candidates to nominate themselves in the country’s first free presidential vote, scheduled to take place in two rounds in May and June.

The Muslim Brotherhood’s decision to put forth a second candidate was spurred by fears that the ruling military council may use Egypt’s election committee to disqualify Islamist presidential hopefuls in order to make room for former regime officials to win.

The upcoming election is a crucial election for both the military and the Brotherhood, which are already sparring for power. The military wants to keep control of key security and economic portfolios until at least June, when a new president is announced, while the Brotherhood is pushing to name a new government first.

In a statement released late on Saturday, the Brotherhood said they are putting forth party leader Mohammed Morsi as an alternate to Khairat el-Shater, the group’s chief strategist and financier.

Any candidates have just one day before the deadline for submitting applications to run for president. They will have to get the backing of 30 legislators or 30,000 signatures by Sunday evening.

The Brotherhood, which emerged from last year’s uprising as the most powerful party in Egypt when it won nearly half the seats in parliament, said in its statement that there appear to be efforts by Egypt’s election committee to disqualify certain candidates from the race.

“There are attempts to create barriers for some candidates,” the Brotherhood said, adding that there are those who want the former regime to return to power.

A Cairo court on Saturday barred yet another candidate, liberal Ayman Nour, from running, saying he had been accused in a case and was still in the process of getting a pardon on health grounds.

Nour came a distant second to Hosni Mubarak in a 2005 election, but a few months later was sentenced to five years in prison on charges of forgery that were widely viewed as trumped up as part of a political vendetta.

Nour’s lawyer said he would be appealing the latest ruling, the official news agency Mena reported.

Others who have expressed interest in running for president are Mubarak’s ex-deputy and longtime spy chief Omar Suleiman, his ex-prime minister Ahmed Shafiq, and his ex-foreign minister and former Arab League chief Amr Moussa.

“Because we are protecting the success of the revolution and all of its goals … we have decided as the Brotherhood and its party to nominate Mohammed Morsi as our back up candidate for president,” the statement said.

El-Shater was released from prison last month after serving five years on charges relating to his membership in the then-outlawed Brotherhood under Mubarak.

The announcement comes just hours after Gamaa Islamiya put forward a cleric as its candidate after reports surfaced that the group’s hopeful, Hazem Abu Ismail, could be disqualified from running. Egypt’s election commission said on Saturday that his mother was a US citizen.

The Gamaa Islamiya, or Islamic Group, said it selected Safwat Hegazy, a prominent imam who preaches on television and who took part in last year’s protests as a back-up to Abu Ismail.

Last month France barred Hegazy from entering the country for an Islamic conference along with a number of other high-profile Muslim clerics on the grounds that they “call for hatred and violence.” 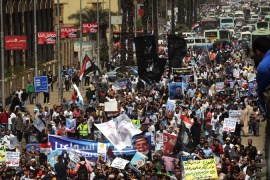 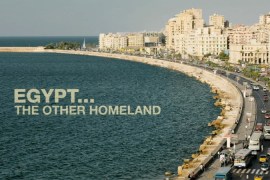 Egypt: The Other Homeland

Revealing a bygone era, we tell the story of Egypt’s once-thriving Greek community. 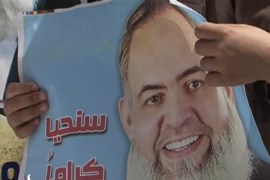 Hazem Abu Ismail may be barred from presidential poll amid reports his mother is a US citizen.