The US has announced $10m bounty on Hafiz Saeed, accused of masterminding the 2008 attacks in Mumbai.

Wendy Sherman, the US undersecretary of state, on a visit to India, said a $3m bounty had also been announced for Abul Rehman Makki, the brother-in-law of Saeed, leader of the Pakistan-based Lashkar-e-Taiba (Army of the Righteous) group.

Speaking to Al Jazeera’s Kamal Hyder shortly afterwards, Saeed said the US move was prompted by the fact that he had been organising rallies against the opening of supply lines to NATO forces in Afghanistan.

Pakistan closed down the crucial supply route in November after a US cross-border attack left 28 Pakistani soldiers dead.

Rewards for Justice, a programme sponsored by the US State Department, announced the cash reward for the 62-year old Saeed on its website.

“Saeed is suspected of masterminding numerous terrorist attacks, including the 2008 Mumbai attacks, which resulted in the deaths of 166 people, including six American citizens,” the page said.

Ajmal Kasab, the only surviving gunman involved in the three-day rampage in November 2008, has been sentenced to death by an Indian court.

Kasab accused Saeed of organising the attack, which involved 10 gunmen, 9 of whom were killed during the shootout.

Lashkar-e-Taiba, designated as a terrorist organisation by the US in December 2001, is accused by India of carrying out several attacks, including the one on Mumbai.

India welcomed the move as a reflection of India and US’s commitment “to bring perpetrators of the Mumbai terrorist attacks” to justice.

“[The bounty] sends a strong signal to Lashkar-e-Taiba as also its members and patrons that the international community remains united in combating terrorism,” Syed Akbaruddin, spokesman for India’s ministry of external affairs said on Twitter.

Al Jazeera’s Kamal Hyder, reporting from Lahore, where Saeed is believed to be based, said Pakistan was pressured to ban Saeed’s outfits after the US invasion of Afghanistan. Lashkar-e-Taiba was the military wing of his larger organisation, Jama’at-ud-Da’wah.

“He started a foundation, and his men played a key role in aid efforts after earthquake in Kashmir, and the floods in Pakistan. They still are the main frontline in any calamity. He has denied that he has any links to militancy,” our correspondent said.

“A man who is popular across the country- it’s not going to go down very well. It is also symbolic – that the annoucment came in India, by a high ranking US diplomat. That will be an irritant.”

The announcement comes as Asif Ali Zardari, Pakistan’s president, is due to visit India for the first time since the attacks in Mumbai.

The bounty on Saeed, same as the Afghan Taliban leader Mullah Omar, is only second to Ayman al Zawahiri, who succeeded Osama bin Laden as the al-Qaeda chief. Zawahiri has $25m bounty on his head. Saeed is the fifth Pakistani national on the list. 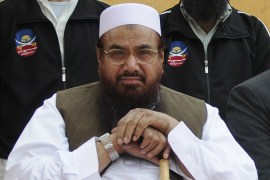 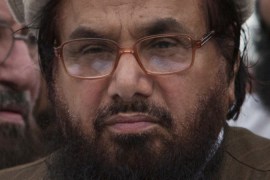 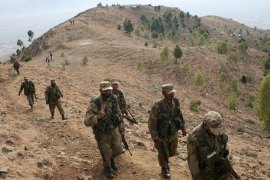 Pakistan needs to reform its military and intelligence services in order to rid itself of terrorist activity. 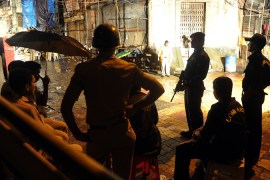 Police search for clues to perpetrators of deadly attacks as Mumbai reels from rush-hour blasts that killed at least 18.