Egypt’s election commission has released a final list of 13 candidates eligible to run in next month’s presidential election, the first since the ousting of Hosni Mubarak, the former president, last year.

Thursday’s list includes Ahmed Shafiq, the last prime minister to serve under Mubarak, who was disqualified and then reinstated over a 24-hour period this week.

“After listening to Shafiq’s appeal, the committee decided to halt the decision to exclude him from the presidential race,” Farouk Soltan, the head of the election committee, said while announcing the list in Cairo.

Shafiq was disqualified on Tuesday, after the military council approved a new law denying political rights to anyone who served as president, vice-president or prime minister in the decade prior to Mubarak’s fall.

The electoral committee also decided to refer the new law to the Supreme Constitutional Court to determine whether it was constitutional or not.

“This could be a challenge to the legitimacy of the presidential election and the whole transition process,” Omar Ashour of the Doha Brookings Centre told Al Jazeera.

Abol Fotouh may now receive backing from supporters of the Salafist al-Nour party.

The eligible candidates were among a total of 23 hopefuls before the commission disqualified 10 of them earlier this month.

Among those barred from running are Omar Suleiman, Mubarak’s former vice-president and spy chief, along with Khairat al-Shater of the Muslim Brotherhood and Salafist Hazem Abu Ismail.

Soltan told a news conference on Thursday that he intended to refer to criminal investigators some of the 10 disqualified hopefuls because their applications contained material that broke the law.

He did not elaborate, but it is widely suspected that the 30,000 signatures collected and submitted by some independent applicants included forged ones.

Independent candidates are obliged under the election law to collect 30,000 endorsements from Egyptians in at least 15 of Egypt’s 18 provinces as part of the requirements to run.

The generals who took power in Egypt when Mubarak stepped down 14 months ago in the face of a popular uprising have promised to hand over power to a civilian administration by July 1, ending a transition period marred by the use of deadly force by troops and police against pro-democracy protesters, a sharp rise in violent crime and a worsening economic crisis.

Presidential elections are set for May 23 and 24 with a runoff scheduled in June. 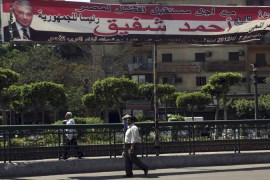 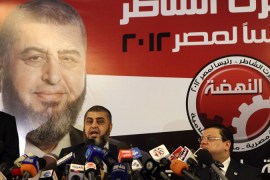 With field of presidential hopefuls now whittled down, support from al-Nour party could make, or break, a candidate.