Egypt’s ruling military has approved a law that bans top Hosni Mubarak-era officials from running for the presidency, ending the campaign of frontrunner Ahmed Shafiq.

The ruling, issued on Tuesday, excludes his last prime minister and further depleting a field reduced by the disqualifications of other front-runners.

A copy of the law published on the website of the state-run al-Ahram newspaper said the legislation would take effect from Tuesday.

It showed that the bill had been printed in the official gazette, confirming that the legislation drafted by the Islamist-dominated parliament had been approved by the military.

The ruling means Shafiq, appointed as prime minister by Mubarak in his last days in power, is out of the race. He had been seen as one of four remaining front-runners for the presidency of the Arab world’s most populous country.

Al Jazeera’s Sherine Tadros, reporting from Cairo, said that the elections commission still needs to study the law and decide whether to implement it, with the final list of presidential candidates to be released on Thursday.

“There’s no right to appeal after Thursday, and Ahmed Shafiq’s people have already said they haven’t been notified by the elections commission that there’s anything wrong with their candidate, so they are continuing to campaign as normal,” said Tadros.

Our correspondent added that some are questioning the constitutionality of the law “given the fact that it was so obviously designed to take out one presidential candidate after he submitted all of his papers”.

The others are Mohamed Mursi, the Muslim Brotherhood’s candidate, Abdel Moneim Abol Fotouh, a former member of the Islamist group, and Amr Moussa, a former Arab League chief and an ex-foreign minister. The law exempts former ministers who were not prime minister, so will not affect Moussa’s candidacy.

Parliament approved the legislation earlier this month, an amendment to an existing law governing political rights, in
response to a decision by Omar Suleiman, Mubarak’s former vice president and intelligence chief, to run for the presidency.

But Suleiman was disqualified a few days later for allegedly failing to gather the required number of voter endorsements required to run.

The committee overseeing the vote also banned nine other contenders, including the Muslim Brotherhood’s first-choice candidate and a popular Islamist preacher.

Since Suleiman declared his intention to run, tens of thousands of Egyptians, both Islamists and liberals, have packed into Cairo’s Tahrir Square on two consecutive Fridays to protest against Mubarak’s old guard contesting the elections.

Some jurists have challenged the constitutionality of the law as drafted by parliament, criticising it on the grounds it
appeared to be targeted against one or two officials from the Mubarak era.

“Ahmed Shafiq will not be able to run in the presidential elections, but still there is some doubt about the constitutionality of the law itself and that will add to a lot of complications that exist right now,” said Hassan Nafaa, a professor of political science at Cairo University.

“That will cast some doubt on the whole election.” 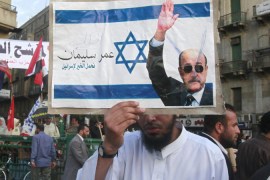 Head of military council meets with 17 political parties and groups as 10 candidates are barred from presidential poll. 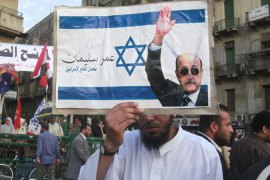 Muslim Brotherhood leader and ex-spy chief among 10 presidential candidates whose disqualifications have been upheld. 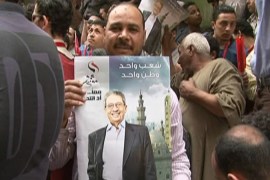