Both Francois Hollande and President Nicolas Sarkozy have addressed supporters the morning after first-round results in France’s presidential election were released.

The two men emerged at the top of the field of 10 candidates, and now face a run-off poll on May 6. Polls held by Harris Interactive, IPSOS and CSA late on Sunday all saw Hollande beating Sarkozy in the second round by a margin of 54-46 per cent.

Hollande, the Socialist Party candidate who secured 28.6 per cent of Sunday’s vote, said he would now gather together “all the French people who want change”.

“We have to convince the French people who expressed certain messages during yesterday’s vote, so I’m going to talk to them,” he said.

Veteran leftist Hollande, who has proposed to recruit 60,000 state-employed school teachers if elected, said he would not attempt to convert those who voted for the far-right leader of the National Front, Marine Le Pen.

However, he said he did want to listen to their grievances with the way the country is run.

“I am not going to seek out voters from the extreme right,” Hollande said.

“I won’t try to seduce them. The far right has strong support at the moment and that’s the fault of Nicolas Sarkozy. But some voters voted for the far right because they’re angry [at Sarkozy].

“They are the voters who I want to hear from.”

Sarkozy, the candidate of the centre-right UMP Party, has campaigned on a platform of tightening immigration controls and supporting business by loosening legal rights for workers – calling himself “the captain of a ship caught in a storm”.

After coming second to Hollande in Sunday’s poll, garnering 27.2 per cent of the vote, Sarkozy challenged his rival, repeating his call for face-to-face televised debates. Hollande has agreed to one such debate.

“This campaign must be about the truth, and I am ready to debate about it,” he said.

“I proposed three debates on any subject. This is a crucial moment. The French people need to have all the facts so they can choose and I won’t be running away from it or hiding from it.”

After many accused the incumbent of veering to the right during his campaign, he too addressed the popularity of Marine Le Pen, who received a record 17.09 per cent of the poll.

“The National Front voters need to be respected, they made a choice, they expressed themselves,” Sarkozy said.

“It’s a vote of suffering. A vote of crisis. Why insult them because of it? I heard Mr Hollande making remarks on the subject. So Mr Hollande thinks it’s fine to talk to [Left Front former candidate] Mr Melenchon – who says if you bump into a rich guy, empty his pockets – that’s fine to say, that’s normal, that’s being a Republican, but the person who is suffering should not be able to express it. I am telling them [National Front voters]: ‘I’ve heard you.'”

Al Jazeera’s Tim Friend, reporting from Paris, said that Sarkozy would struggle to win votes from the far right.

“Marine Le Pen will not direct her unexpectedly large vote towards Sarkozy,” he said. “She wants to see his party weakened and to establish herself as the strong voice of the right.”

A spokesperson for German Chancellor Angela Merkel said in Berlin: “This high score [for Le Pen] is alarming but I expect it will be ironed out in the second round.”

Yet Sarkozy appeared to continue to appeal to National Front voters, demonstrating his right-wing values: “These anxieties, this suffering, I know them, I understand them,” he said.

“They are about respecting our borders, the determined fight against job relocation, controlling immigration, putting value on work, on security.”

Responding to comments that her popularity stemmed from a “protest vote”, Marine Le Pen said: “I find that particularly rude in regard to our supporters.

She continued to admonish Sarkozy for his apparent appeals to the far right: “To treat my voters like they’re fools, I fear his calls will fall on deaf ears.”

As Sarkozy struggles to win over the rest of the country’s right wing, Hollande looks certain to pick up support from the Green Party and the Left Front, almost certainly guaranteeing him some 42 per cent.

Meanwhile, the uncertainty over France’s next leadership appeared to affect financial markets, with a two per cent fall in the country’s CAC-40 index as markets opened.

Analysts cautioned, however, about linking these results with the electoral poll, warning that markets may be less worried about a Socialist president as they are about wider financial unrest in Europe at large. 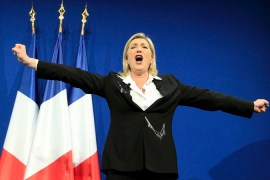 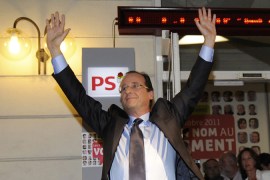 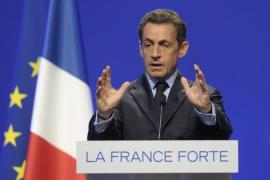 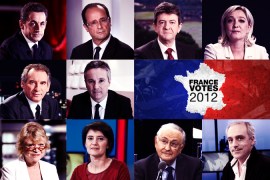 Where do France’s election candidates stand?

Learn the French presidential candidates’ stances on everything from economy and migration to foreign policy and the EU.