The Arab League ministerial committee on Syria has backed the six-point plan devised by international envoy Kofi Annan and called on Damascus to stick to it.

“We are fearful that the regime is playing for time. We expressed this to Mr Annan.”

The talks came as UN observers admitted on Tuesday they faced a tough task to firm up a ceasefire in Syria, as five civilians were killed in the latest violence on the sixth day of a tenuous truce.

Arab League Secretary General Nabil al-Arabi, attending the Doha meeting along with Annan, called for the ceasefire to be implemented “completely and immediately”.

“Annan’s mission is a political one which would take some time,” he said. The Arab ministerial committee, chaired by Qatar, includes Saudi Arabia, Oman, Egypt, Sudan, Algeria, Iraq, and Kuwait.

After a spike in violence the Arab League ended its own Syrian monitoring mission in late January, barely a month after sending observers.

On Monday, Qatar’s emir, Sheikh Hamad bin Khalifa al-Thani, said the chances of Annan’s plan succeeding were “no higher than three per cent” and that Syrians should not be supported through peaceful means but “with arms”.

Qatar has taken an aggressive stance in favour of the uprising against Syrian President Bashar al-Assad.

‘Not an easy process’

Continuing violence in Syria has dampened expectations in many quarters for the prospects of a peace plan proposed by Annan, which was supposed to halt all fighting and bring about a withdrawal of Syrian heavy weaponry from areas under attack.

The plan was agreed to by Assad, but compliance by Syrian forces appears to have been partial, despite the arrival in Damascus on Sunday of a six-man advance team of UN monitors.

UN officials said the team was still drawing up plans, and the head of the observer team, Moroccan Colonel Ahmed Himmiche, said on Tuesday it would take time to reach badly affected towns and cities.

“There should be co-ordination and planning and we should move … step by step,” he said. “It’s not an easy process.”
The group is to be reinforced by an additional 25 monitors who are expected to arrive in the next few days, he said.

Hopes for the observation mission have been tempered by the failure of the earlier Arab League mission which was hampered by regime restrictions on movement, and UN chief Ban Ki-moon has demanded his monitors be given free access.

Al Jazeera’s Steve Chao, reporting from outside the meeting in Doha, said Arab leaders were “highly sceptical about Syria’s intentions”.

“The Arab League did not say exactly how much time they would give Kofi Annan … before they basically rule this peace plan a failure,” Chao said.

“They pointed to the fact that so far, five days into this ceasefire, Syria has yet to implement any of the six points Kofi Annan has laid out.”

Activist reports of shelling against opposition strongholds by Syrian government forces appeared to deal a fresh blow to the ceasefire.

While the overall level of violence is down since the ceasefire formally took effect on Thursday, the regime has stepped up attacks.

The number of people killed every day has also risen steadily since a brief lull that coincided with the start of the truce. Activists reported at least 26 people killed on Monday.

Army tanks were reported to have shelled the southern town of Busra al-Harir, killing at least two people, according to the the UK-based Syrian Observatory for Human Rights.

The town, about 70km south of the capital of Damascus, is considered a stronghold of anti-government Free Syrian Army fighters.

Government forces also shelled the Khaldiyeh neighbourhood in the central city of Homs, a centre of the rebellion against Syrian President Bashar al-Assad, according to the Observatory.

Areas of Homs have been under continuous attack for weeks, with only a short lull on the first day of the ceasefire, according to activists. 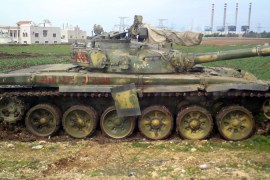 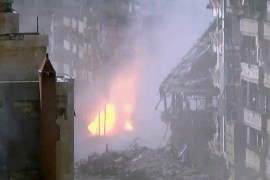 Fighting in Syria as UN monitors go to work

Handful of observers in Damascus to prepare way for UN mission, but activists report violence in Homs, Hama and Idlib. 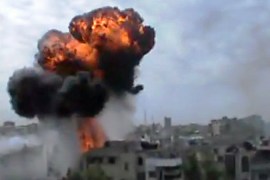