Ruak, who had campaigned in military fatigues to highlight his role in the fight against Indonesian occupation, won 61.23 per cent of the vote, according to figures from the elections secretariat on Tuesday.

His challenger in Monday’s vote, Francisco “Lu Olo” Guterres – also a hero in the independence struggle – trailed with 38.77 per cent, according to the count.

The results released by the National Election Commission still need to be vetted by the court of appeals before they are official. But with such a large gap, it’s unlikely there will be any significant change.

“We are very much elevated by the result, by the current outcome,” said Ruak’s spokesman Fidelis Magalhaes.

“We expect to see some changes [in the final count], minor, probably one or two percentage points, but without a clear swing or fluctuation of points,” he added.

If confirmed, Ruak, also a former defence chief, will become the leader of the impoverished and oil-dependent country, replacing Nobel laurate Ramos-Horta, who trailed in the first round last month.

The president has no real power, but can act as a moral compass during difficult times. Ramos-Horta, elected president after the government collapsed in 2006, helped steer the country back on course after a turbulent period, but his popularity has since faded.

Ramos-Horta came third in the first round of voting on March 17, leaving two contestants in a runoff that proved to be free from violence or claims of vote-rigging.

The streets of Dili were quiet on Tuesday, with no sign of celebration, unlike the campaigning when hundreds of supporters from both sides sped past on motorcycles and buses, flashing victory signs.

An international poll observer said the wide margin left no room for dispute over the results.

“If there was a close result there could have been some quarrelling, and while it’s not a landslide, this is a clear victory,” said Rui Feijo, an election observer and researcher from Portugal’s Coimbra University.

The vote marked the first in a series of key events in the chronically unstable country, still traumatised by Indonesia’s brutal 24-year occupation which ended with in 1999.

In May, East Timor will celebrate 10 years of independence, which came after three years of United Nations administration. On July 7, voters will choose a new government in a general election.

Both Guterres, a former parliament speaker, and Matan Ruak pledged to abide by the outcome of the balloting and have urged their supporters to do the same.

The UN has said peacekeepers stationed in East Timor since 1999 would pull out as planned by the end of 2012 if both elections were peaceful.

A spokesman for UN Secretary General Ban Ki-moon said Monday’s vote had taken place in a “peaceful and orderly manner”.

But the country still faces many challenges. Roads are in disrepair, there is little access to clean water or health services, and the capital is littered with abandoned, burned-out buildings where the homeless live as squatters. Many people live on 50 cents a day.

East Timor, a nation of 1.1 million people, has had a turbulent past.

It was a Portuguese colony for 400 years before Indonesia sent in troops in 1975. The 24-year occupation was ended by a UN-sponsored independence referendum in 1999.

The Indonesian occupation left more than 170,000 dead. Withdrawing soldiers and proxy militias went on a rampage, killing another 1,500 people and destroying much of the infrastructure. 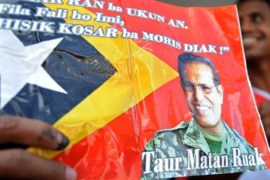 East Timor’s ex-defence chief, who spent much of his life fighting for nation’s independence, set to become president. 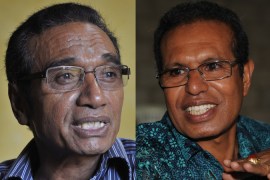 Voters choosing between veterans of fight for independence in runoff ballot to elect successor to Jose Ramos-Horta. 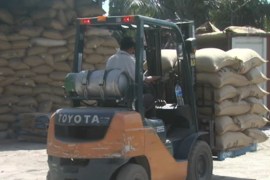 Some fear abundant resources could turn out to be a curse in wake of frenetic economic growth. 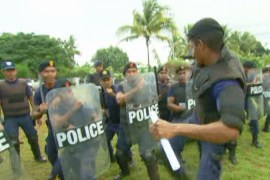