More than 40 pro-Palestinian activists have detained by Israeli authorities at Tel Aviv’s international airport for taking  part in an attempted “fly-in”.

The Welcome to Palestine campaign, now in its third consecutive year, aims to gather activists from more than 15 countries in Israel from April 15 to 21 to “challenge the Israeli siege of the occupied territories”, it says on its website.

Micky Rosenfeld, an Israeli police spokesman, said on Sunday that 41 people had been refused entry at Ben Gurion airport by early afternoon and would be deported. Four Israeli supporters, two holding “Welcome to Palestine” signs, were also arrested as they waited to greet the arrivals.

Rosenfeld told Al Jazeera, “We know those activists have intentions of arriving here, intentions of causing disturbances both inside the terminal … to stop the the Isreali aircrafts from coming in.”

Al Jazeera’s Cal Perry in Tel Aviv said that 60 per cent of the activists had been stopped at their point of origin.

Earlier on Sunday, hundreds of pro-Palestinian activists were prevented by authorities across Europe from boarding flights bound for Tel Aviv.

The Swiss police prevented about 100 pro-Palestinian activists from flying to Ben Gurion airport, according to the Welcome to Palestine campaign website.

Anas Mohammed, the campaign’s spokesman, said on Sunday: “The information we have obtained from activists is that there is a high presence of police there and that the police are trying to prevent them from boarding.”

“Besides that there has been the confiscation of a passport of one of the activists.”

The Swiss and French activists had bought their tickets in advance and were due to fly on a 6:30am local time (04:30 GMT) flight to Tel Aviv, Mohammed said.

British airline Jet2.com and French carrier Air France said on Saturday they were cancelling seats on flights to Tel Aviv.

Israeli police said on Sunday that hundreds of officers had been deployed at Israel’s main airport to detain activists flying in.

An interior ministry spokeswoman said the immigration authority had on Wednesday given airlines the names of about 1,200 activists whose entrance to Israel would be barred.

At least 120 pro-Palestinian activists protested at Brussels airport on Sunday after a number of them were barred from flying to Tel Aviv.

Three people were under “administrative arrest” for disturbing the peace after between 120 and 150 people protested, Kaatje Natens, a federal police spokeswoman, said.

Activists said at least 60 Belgian and 40 French citizens taking part in the campaign were unable to fly despite holding airline tickets.

About 80 of them had made reservations with Brussels Airlines while the rest were supposed to travel with Lufthansa and Swiss Air, said Jan Dreezen of the Palestine Solidarity organisation, according to the Belga news agency.

“We demanded that these people be able to travel but they were obviously not authorised. Israel has clearly put pressure on these airlines and the Belgian government has regrettably cooperated in this intimidation,” Dreezen said.

Wencke Lemmes-Pireaux, a Brussels Airlines spokeswoman, confirmed that a number of passengers were forbidden from flying at the request of Israeli authorities but she said it was against company policy to say how many.

“Several airlines have received from Israeli authorities a list of people who are not allowed to go to Israel,” Lemmes-Pireaux said. “We are forced to follow the law so we could not take them aboard.”

The Guardian, a British newspaper, reported that Jet2.com had contacted three women passengers late on Friday to inform them that their seats had been cancelled on a flight to Tel Aviv scheduled to leave Manchester, northern England, at 09:00 GMT on Sunday.

A company spokeswoman declined to comment on the number of affected passengers, adding that all the airline’s tickets were non-refundable.

“As a result of providing that information, Jet2.com was informed by the Israeli authorities that certain passengers booked to travel on flight LS907 would not be permitted to enter Israel,” the company said in a statement.

“We were further advised that if we were to allow them to travel, we would be responsible for their immediate return to the UK … In light of this position by the Israeli authorities, we were unable to accept them to travel on the flight.”

Lufthansa, the German airline, on Friday cancelled the tickets of dozens of pro-Palestinian activists for this weekend, saying it was complying with Israeli advice.

Air France said on Saturday it had also withdrawn tickets for flights on Sunday from Paris’s main Charles de Gaulle airport and from Nice.

“Under the Chicago Convention, Air France refuses to embark any passenger not admissible by Israel,” a spokeswoman said.

One Swedish activist was stopped at the border crossing from the Sinai said she was prevented from entering the country unless she signed a “contract’ written by the Israeli border authorities.

The Welcome to Palestine campaign is in its third consecutive year with its organisers in the West Bank saying they want to “publicise Israel’s control of movement into and out of the Palestinian territory and to boost solidarity with the Palestinian people”.

Speaking to Al Jazeera, Mick Napier, the UK co-ordinator for the campaign who was among the people prevented from travelling from Manchester airport to Tel Aviv said that some of the activists did manage to board the flight.

“They were not successful because there are still people who managed to board and are now heading to Tel Aviv,” he said.

Referring to the Israeli government’s response to the campaign, he said, “We’re being treated bizarrely. Only in Israel do travellers who arrive with tooth brushes constitute a threat to the state.”

Napier said that Israel is “unique, because they openly dream of ethnically cleansing the Palestinians”.

Binyamin Netanyahu, the Israeli prime minister, advised the activists to concentrate on “real problems” in the region.

“We appreciate your choosing to make Israel the object of your humanitarian concerns,” he said in an open letter issued by the prime minister’s office [the letter can be found at the end of the article].

“We know there were many other worthy choices. You could have chosen to protest the Syrian regime’s daily savagery against its own people, which has claimed thousands of lives.

“You could have chosen to protest the Iranian regime’s brutal crackdown on dissent and support of terrorism throughout the world.” 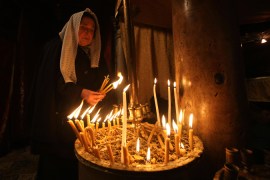 Welcome to Palestine: ‘Even prisoners are allowed visits’

Even Jews can be barred by Israel from travelling to Bethlehem – for the thought crime of supporting Palestinian rights. 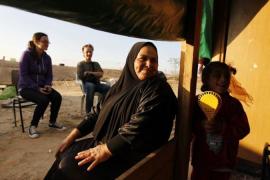 Plans to move entire communities and put them in townships would deprive them of their livelihood and land rights. 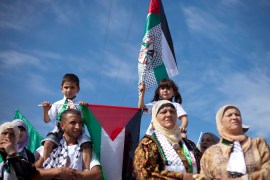 A new generation of Palestinian activists is breaking down old divisions imposed by Israel. 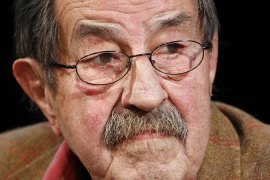 Israel cites a poem in which the Nobel Prize-winning author described the Jewish state as a threat to world peace.