A North Korean rocket launch has been confirmed as a failure by the country’s official news agency after officials in other countries said that the suspected long-range missile had crashed into the sea.

North Korea said on Friday that a satellite carried by the rocket launched earlier in the day did not enter orbit.

“The earth observation satellite failed to enter its preset orbit. Scientists, technicians and experts are now looking into the cause of the failure,” North Korea’s official KCNA news agency reported.

The failed launch came amid ceremonies in Pyongyang marking the 100th anniversary of the birth of North Korea’s founder and “eternal president” Kim Il-sung and consolidating the authority of present leader Kim Jong-un.

Kim Jong-un, the third generation of North Korea’s ruling family to lead the country following the death of Kim Jong-il in December, on Friday lead a mass rally in the capital in honour of his grandfather and father.

He was also bestowed with the new title of first chairman of the National Defence Commission, the country’s top decision-making body, completing the transfer of political, military and party power in his hands.

Pyongyang said the purpose of Friday’s launch was to put a weather satellite into space, but critics said it amounted to a long-range missile test, which North Korea is banned from conducting by UN resolutions.

“North Korea’s launch… is a clear breach of the UN resolution that prohibits any launch using ballistic missile technology. It is a provocative act threatening peace and security on the Korean peninsula and Northeast Asia,” Kim said.

A South Korean defence ministry spokesman told reporters the rocket had been launched at 7:39am local time on Friday (2239 GMT on Thursday).

“In terms of what exactly happened, South Korea’s defence ministry has given us what could be the clearest appreciation so far,” Al Jazeera’s Harry Fawcett reported from the South Korean capital Seoul.

“They say it hit a maximum height of 151km before they believe it blew up and came into the sea in some 20 pieces off the coast of the Korean peninsula, about 100-150kms away,” he said.

The three-stage rocket’s flight path was expected to take it over the sea between the Korean peninsula and China, where the first stage was due to splash down. A second stage was due to land in waters off the Philippines.

Friday’s blast-off marked the fourth failed rocket launch for North Korea so far, after previous attempts in 1998, 2006 and 2009.

North Korea may stage a military provocation against the South or a nuclear test following its failed launch, a senior South Korean defence ministry official told a parliamentary hearing in Seoul on Friday.

“The possibility of an additional long-range rocket launch or a nuclear test, as well as a military provocation to strengthen internal solidarity is very high,” the official said.

However he added that there were no specific indications of military actions from the North.

The two Koreas are divided by the world’s most militarised
border and remain technically at war after an armistice ended the Korean War in 1953.

“If South Korea’s intelligence agency is correct that [North Korea] was planning this ahead of time, almost certainly now it will have to go ahead [with the nuclear test],” said Al Jazeera’s Steve Chao.

“North Korea still holds close to the military-first approach and the fact that we have a young 20-something leader, Kim Jong-un, who has just taken the helm and is still to prove his medal, he really needs to show some degree of strength.

“He needs to show not only to the international community but more so to his people that he has the strength, that he has the military know-how and capability to carry North Korea forward,” Chao said.

The young leader Kim was given the title of First Chairman of the ruling National Defence Commission at a meeting of its assembly on Friday,

The announcement completes the transfer of power from his father, former leader Kim Jong-Il, who died in December last year.

“[It] is deplorable as it defies the firm and unanimous stance of the international community,” a statement from his office said. “The launch is in direct violation of Security Council Resolution 1874 and threatens regional stability.”

“North Korea is only further isolating itself by engaging in provocative acts, and is wasting its money on weapons and propaganda displays while the North Korean people go hungry,” Jay Carney, the White House spokesperson, said.

The Group of Eight (G-8) bloc of industrialised nations also condemned the launch, while China called for calm on the Korean peninsula.

“We hope all parties can maintain calm and restraint and not do anything to harm peace and stability on the peninsula and in the region,” Liu Weimin, the Chinese foreign ministry spokesman, said in a statement.

Meanwhile, South Korea’s navy began an operation to retrieve and salvage fallen debris from the launch.

South Korea’s official Yonhap news agency said more than a dozen navy ships, many of them equipped with sonar and backed by divers, were combing the area, despite a warning from the North last week not to attempt such an operation.

“If anyone… attempts to shoot down or to salvage our space rocket debris, we would retaliate ruthlessly,” Pyongyang’s Committee for the Peaceful Reunification of the Fatherland, in charge of inter-Korean ties, had said.

The UN Security Council said it would meet in an emergency session on Friday to discuss the situation in North Korea. 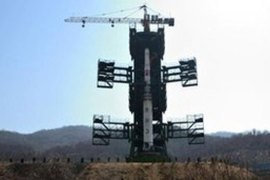 US and Japan threaten “appropriate action” as Pyongyang says it has begun fuelling rocket for planned launch. 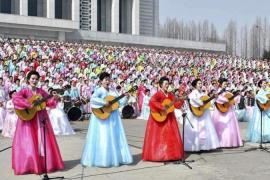 Three East Asia experts explain why Pyongyang is going all-out to honour the centenary of the “eternal president”. 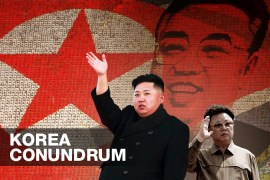