Thousands of Egyptians have taken to the streets in support of parliamentary legislation that bans former top officials from the regime of Hosni Mubarak from the right to run for office in the next 10 years.

The Muslim Brotherhood, along with ultraconservative Salafis, rallied their supporters Friday in the capital’s Tahrir Square.

The legislation, passed on Thursday, is subject to approval by the country’s Supreme Council of the Armed Forces (SCAF), the military council which has been running the country since Mubarak was toppled.

The move comes after Omar Suleiman, Mubarak’s former vice-president and chief of intelligence, launched his bid to become the country’s next head of state.

Khairat El-Shater, the presidential candidate for the Muslim Brotherhood, has denounced Suleiman’s attempt to make a political comeback, likening it to an attempt “to steal the revolution” and warned it could spark huge street protests.

“It really is a pretty festive atmosphere, and there’s also a lot of anger at the protest,” said Al Jazeera’s Sherine Tadros, reffering to the protest in support of parliament’s legislation.

“They’re telling us that if Omar Suleiman, the former vice president, and Ahmed Shafik, the former prime minister, are allowed to run, and indeed if they win, they will stage another uprising.

Liberal and secular groups also do not wish to see the return of Mubarak-era figures, but they stayed away from Friday’s protest.

They have instead called a demonstration on April 20 to protest at what they see as “Islamist” monopolisation of political life in the country since the revolt.

The presidential election is to get under way on May 23, with two days of voting expected to be followed by a run-off in June between the top two candidates.

Currently the field of 23 candidates is broadly made up of members of the two leading parties in parliament – the Muslim Brotherhood’s Freedom and Justice party  and the Salafi al-Nur party – officials who served under Mubarak and independent leftists and liberals.

The law does not cover former members of Mubarak’s cabinet, allowing Amr Moussa, a leading liberal contender, to run for the post. Moussa served as Egypt’s foreign minister from 1991 to 2001.

As the head of his intelligence services, Suleiman was one of Mubarak’s closest advisers. He was appointed as vice-president after the eruption of the popular uprising against him on January 25 last year.

Shater has said Suleiman’s candidacy is an insult to Egyptians who rose up against Mubarak.

Suleiman has said he will win support among Egyptians who he believes are angered at attempts by the Muslim Brotherhood to dominate the post-Mubarak era.

The military council has been governing with Mubarak’s presidential powers since it took control of the country. That means parliament has only limited authority, though the chamber was elected in Egypt’s most democratic election in six decades. 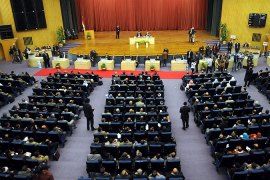 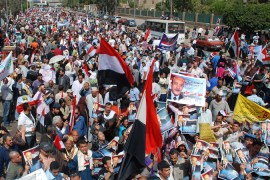 Muslim Brotherhood has announced it is nominating the head of its party as a back-up candidate for president. 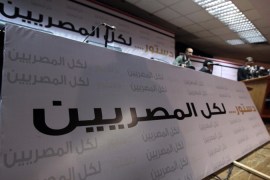